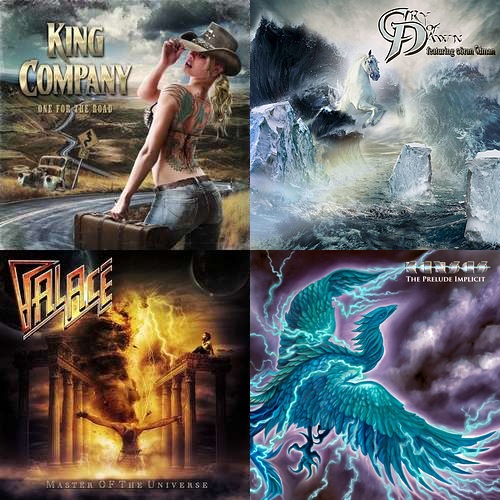 New awesome albums are coming up this August 2016 (and next month), go and enjoy the advanced singles.
Biggest Melodic Hard Rock AOR label Frontiers Music obviously gets all the attention, with the excellent PALACE project and KING COMPANY as main attraction, both bands first singles presented here on the previous 0dayrox Advanced Releases. But now we have 2 more songs of each.

Finland’s KING COMPANY operated with a different name and changed it for their debut album with Frontiers. New cuts ‘Shining’ and ‘Cast Away’ are primo Scandianvian Melodic Hard Rock of the highest order.
PALACE is a Swedish melodic hard rock band founded by lead singer / guitarist Michael Palace, who began working with Frontiers as a songwriter and guitar player for First Signal (featuring Harry Hess), Cry Of Dawn (with Goran Edman), Kryptonite (featuring Jakob Samuel) and Toby Hitchcock. The successful collaborations led to a worldwide record deal with Frontiers.
The new presented tracks ‘Path To Light’ and ‘Part Of Me’ are killers.

Speaking of CRY OF DAW, thenew Melodic Rock / AOR project featuring Goran Edman on all lead vocals (self-titled debut album to be released on September 23rd) are delivering two advanced tracks, and believe me, this is pure AOR heaven.
Another great surprise comes from Helsinki, Finland; SKY OF FOREVER, a new band featuring musicians from Stratovarius and Tracedawn. But don’t be fooled, this is pure Melodic Rock! Check the superb first single ‘Summer Rain’.

After many years, legends KANSAS are back with a new album titled ‘The Prelude Implicit’ to be released next September. Featuring the great Billy Greer on lead vocals the first tune ‘With This Heart’ sounds a bit like Journey. Can’t wait to the full album.