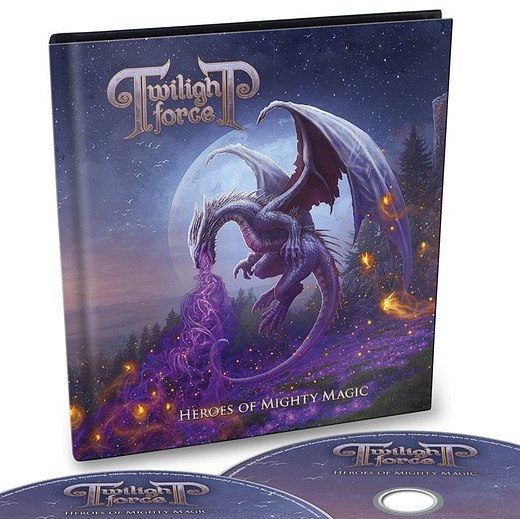 There have been some great power metal bands over the last decade, but no fresh faces that have managed to provide the genre’s classic epic thrills. For their new album “Heroes Of Mighty Magic” Swedish contingent of TWILIGHT FORCE are receiving a hefty investment from prestigious label Nuclear Blast… there could be something there.
Let’s check this “Heroes Of Mighty Magic 2CD Limited Edition Digibook“.

We were pleasantly surprised with Twilight Force first album presented here on the blog some time ago. Now, with the backing of new home Nuclear Blast, the Swedes have fashioned a mighty follow-up to cement their place as the rising stars of classical power metal.
“Heroes Of Mighty Magic” offers everything craved by the genre’s disciples: impressive guest singers in the form of Joakim Brodén of Sabaton and Rhapsody Of Fire’s Fabio Lione, broadsword-friendly, keyboard-loaded anthems, shrill vocals, technoflash musicianship and not only all the cheese that you can eat, but enough for your friends and families, too.
From the greeting card-style image of a dragon adorning its cover to the Harry Potter-esque tales of what the biography calls “myths, adventures and heroic sagas” (they prefer the term ‘adventure metal’), this album deserves a neon-lit sign: ‘Approach with caution, loonies ahead.’

Yeah, dragons, swords, mythological references etc, were cool in the Seventies / Eighties, but 2016? Some may laugh at it… bur you know? Twilight Force deliver things in a so fun way that it’s truly enjoyable.
I think the key is the feel-good factor; where this album excelled in particular is how seamlessly puts me in a joyful mood – almost sickeningly so – and I loved every moment of it. Additionally, it’s catchy and melodic, a real plus. 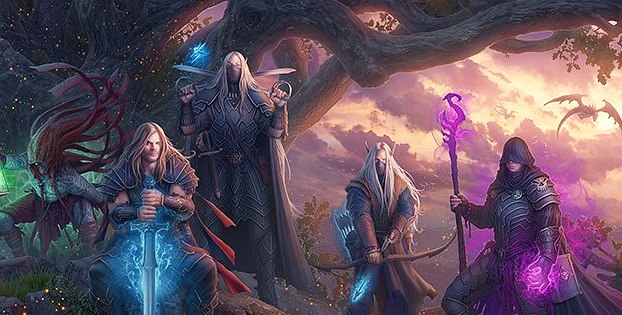 From the opening moments of “Battle of Arcane Might”, is well defined the overall tone to where this album is headed. It’s especially in songs such as the trinity of tracks “Flight of the Sapphire Dragon”, “There and Back Again” (a song not at all connected to The Hobbit, just to be clear) and “Rise of a Hero” that demonstrate the (almost, romantic) desire to create light-hearted and heroic songs that conjure the notion of swigging ales and singing tavern songs alongside dwarfish and elvish company in some far-off land.

There is great consistency with this album, and the way in which it has been mixed and mastered is admirable; serving to maintain an airiness and flair to it that is undeniable.
One of the better and more unexpected moments comes with the title track of the album, wherein thereabout the midway mark Sabaton‘s Joakim Brodén lends his vocals for a welcomed cameo. A song already wonderfully composed and arranged, Brodén’s appearance adds that extra piece to it that brings it home; complementing well the fine vocals of Chrileon (who reminds me a lot of Avantasia’s Tobias Sammet in his vocal approach).
“Heroes of Mighty Magic” is an album that is multi-layered and quite musically complex the deeper you delve into it. Songs such as “To the Stars” – with its fast tempos and quick use of instruments and orchestral arrangements – conjure the notion of something more grand that what merely lies on the surface. 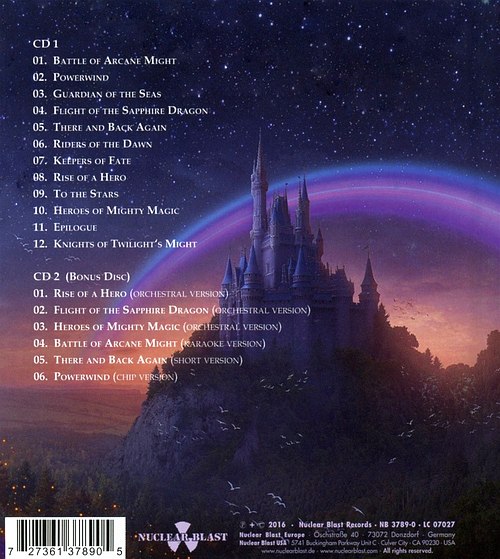 This “Heroes Of Mighty Magic 2CD Limited Edition Digibook” include a bounus disc featuring some really interesting ‘orchestral versions’ and alternate mixes of some tracks, even a ‘chip version’ of one of them, you know, the new musical culture making music based on 8-bit arcade video games. Another proof of thi band’s sense of fun and ’80s vibe.

Power metal not necessarily has to be dark or overtly heavy, and Twilight Force’s new album “Heroes Of Mighty Magic” is a clear example. If you dig the imaginary and fantasy from their lyrics – or even not – you still can enjoy their musicality anyway. It’s all very melodic, very well arranged & produced, catchy.
That’s why I recommend fans of other genres to check this album; production is multi-layered with lots of harmonies, melodic and sounds with a precision like a Swiss clock.
Plus, there’s an overall ‘happiness factor’. I like this a lot.