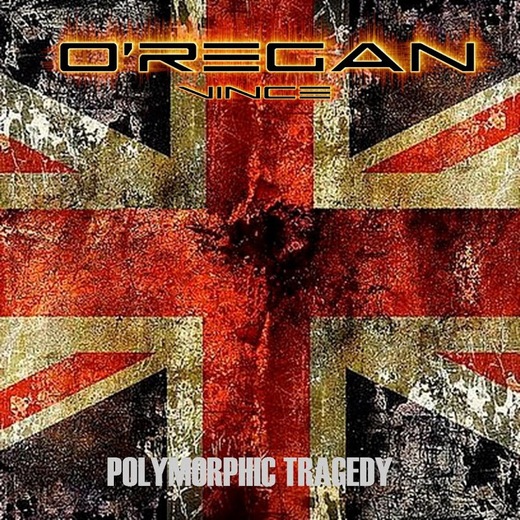 One of the hardest working musicians from the melodic hard rock UK scene, Vince O’REGAN is releasing today his third solo album “Polymorphic Tragedy“. Again the guitarist has called some talented colleagues to contribute to the record published by Z Records.

At this point I think it’s not necessary a presentation, but for newcomers, Vince O’Regan is an experienced British guitarist recently part of Legion – now disbanded but with a ‘final album’ to be released soon – and Coda (with Paul Sabu), but also he has been the co-founder of 90s cult melodic rock group Pulse and has been previously involved in bands such as Kooga (another cult AOR outift) and acclaimed Irish rockers No Sweat.
Vince’s big break came in the year 2000 when he was inducted into Magnum vocalist Bob Catley’s band for the co-headlining tour with Ten.

“Polymorphic Tragedy” blends the style of O’Regan’s two previous solo albums: the first was pretty edgy melodic hard rock, the second more AOR.
So we have here the groovy ‘Unchain The Night’, ‘Welcome To The Real World’, the bouncy ‘Trial By Fire’, ‘Masquerade’, all strong melodic hard rockers. Title track ‘Polymorphic Tragedy’ is the heavier track on the record (and one of the best) bordering hard rock.

But all is balanced by cool AOR numbers such as the really good ‘Falling Sky’ (very nice harmonies and clean guitars), the pumping ‘Long Way To Go’, the ultra-catchy and my favorite ‘Destiny’ plenty of keyboards, and the fine ballad ‘Gabrielle’ with its ‘American’ feel.

“Polymorphic Tragedy” is the most complete, varied, and I’d say, best O’Regan album to date. You have seriously well written & arranged songs here, very well played and performed by stupendous vocalists.
If you did not liked Vince O’Regan recent works as part of bands more ‘hard / metal’ oriented, you better check this solo album. There’s some bright Melodic Hard Rock / AOR tunes here, crafted in the classic mold of the genre.
Strongly Recommended