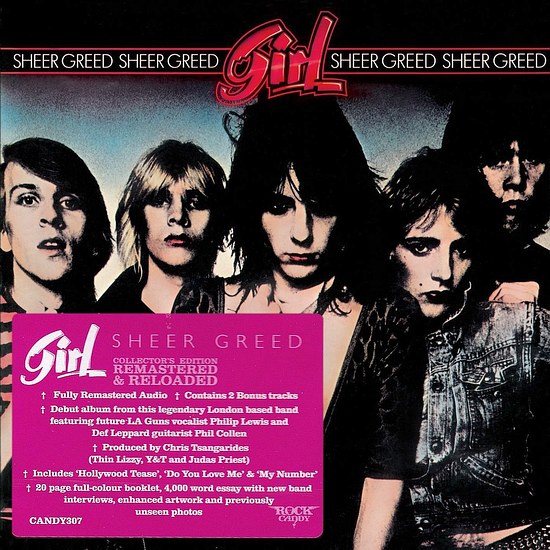 Perhaps British rockers GIRL are best remembered by many for including future Def Leppard guitarist Phil Collen or L.A. Guns frontman Phil Lewis, but this was a band which influenced many acts to come, in many ways. Rock Candy Records has finely remastered their best effort, the rocking “Sheer Greed” including 2 bonus tracks.

Girl exploded into the UK scene in the early ’80s, a scene that was almost exclusively primed for down and dirty hard rock, but these guys were a completely different beast.
Hard rock bands during the very early ’80s complied with a strict in-vogue youth uniform of denim, leather and greasy long hair. The NWOBHM, as it was labelled, may have been a force for good but it certainly wasn’t tolerant of aesthetic deviation… something that Girl found to be a major stumbling block.
Dressed to kill, they resembled a car-crash combination of Duran Duran, David Bowie and the New York Dolls. Musically, however, their riff-tastic style was more in tune with Aerosmith, Cheap Trick and Kiss.

The band’s somewhat androgynous, glammy look, penchant for eye makeup and cocky pouts, set them apart and there was no getting away from the fact that visually these guys were totally out of step with the scene. But this is pure rock n’ roll: go against the rules.
Therefore, they suffered some ridicule; despite the fact that they were actually trailblazing a style that was later successfully utilised by acts such as Hanoi Rocks, Mötley Crüe and Ratt.
Yes, Girl visuals were the core for the US Californian hard rock during all the decade.

They couldn’t have been more different; five musical rouges from London who had, almost by accident, joined a NWOBHM street party and found themselves sticking out like dandies in bare knuckle cage fight.
That these guys were unique was the least of their worries. Fortunately, they made amends by tooling up with razor sharp riffs, knock out hooks and raw production.
They were also fronted by a charismatic lead vocalist that taunted the crowd by blowing kisses to bikers. Wow, that’s attitude.

Signed to Jet Records (owned and operated by the Mr Big of rock, Don Arden), this, the band’s debut album, co-produced by Chris Tsangarides (Y&T, Thin Lizzy) and Nick Tauber (Def Leppard, UFO), made the critics swoon and gained fans at both sides of the ocean.
“Sheer Greed” crackles with the riotous swagger you’d expect from glam metal merchants on the make: Girl dedicated itself to equal opportunity plundering from the New York Dolls and UFO, as opener ‘Hollywood Tease’ buzzing guitars and leering Phil Lewis vocal make plain (“When I’ve broken your heart/I’ll quickly depart”).

These guys knew what they had and weren’t afraid to let everyone know it (as Lewis did when he recut the song after joining L.A. Guns). Judging by the creamy vocal backups spicing “Little Miss Ann,” the Faces’ rooster-topped mops loom large as an influence, too (along with their penchant for archly humorous cock rock).
“Do You Love Me” is one of the earliest Kiss covers, which brims with Paul Stanley’s near-statutory trademark: a chorus that’s shouted into infinity. The song became an encore, though serendipity likely had little bearing on its inclusion (since Girl also supported some of Kiss’ May 1980 U.K. tour dates).

“Passing Clouds” and “The Things You Say” add a poppy touch to the band’s glam glitter, which few bands of the era – hard-rocking or not – touched.
“Heartbreak America” closes on the same strongly confident note on which the album started, with explosive riffs and swagger galore.

Mentioned as influence by many bands and musicians like Axl Rose or Stephen Pearcy, Girl rocks really good with a glammy attitude on “Sheer Greed”. Chris Tsangarides’ crisp, coherent production style kept Girl poised toward mainstream success without watering down the group’s personality quotient.
Excellent remastering by Rock Candy including a pretty hard to find single and b-side as bonus tracks. (Thanks Fred for this one!)