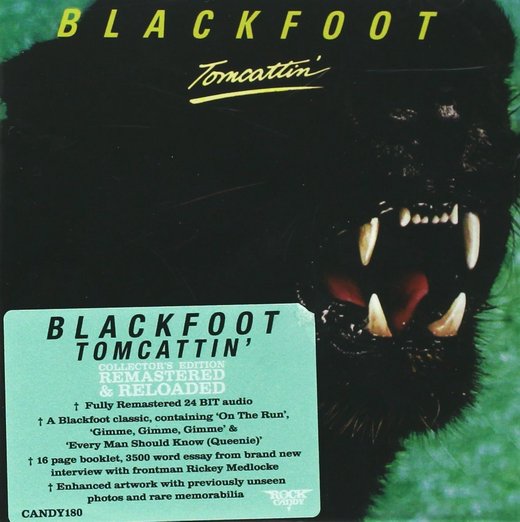 After the great new album from BLACKFOOT recently featured here many of you asked for the band’s legendary albums Remastered & Reloaded by Rock Candy Records. Let’s go with the essential “Tomcattin“.

For some the road to success is rapid and relatively stress free; sudden popularity achieved by a combination of luck and being in the right place at the right time. For others it’s a slow and fatiguing rise to the top with years spent honing their craft, building up a loyal fan following and eventually penetrating the charts by stealth rather by hype.
For Blackfoot, it was the latter path that provided them with recognition years after they first stepped out on the rocky road to success.

‘Tomcatin’ was the Blackfoot’s fourth opus, an album recorded with all the pep and vinegar that years spent in the wilderness might suggest. Strikes, their previous album, had achieved a healthy level of achievement by placing them firmly on the map.
However, musically it was ‘Tomcattin’ that accelerated them into a league of their own.

Produced once again by Al Nalli and Henry ‘H-Bomb’ Weck (and featuring a guest appearance by Shorty Medlocke, band leader Rickey’s grandpa) the record kicked and clawed its way out of the starting gate like a crocodile snapping at their heels. 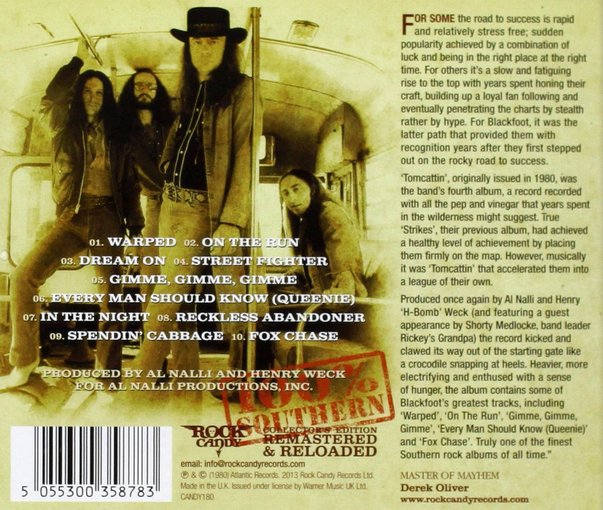 Heavier, more electrifying and enthused with a sense of hunger, the album contains some of Blackfoot’s greatest tracks including ‘Warped’, the killer ‘On The Run’, ‘Gimme, Gimme, Gimme’, the groove-monster ‘Every Man Should Know (Queenie) and ‘Fox Chase’.
Truly one of the finest US Southern Rock / bluesy Hard Rock albums of all time. I love this record from start to finish. Great, pristine remastering by Rock Candy.
A must have mofo