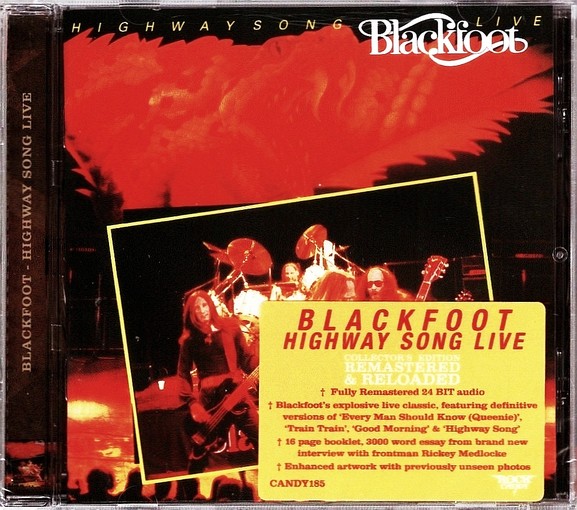 More from BLACKFOOT classic albums Remastered & Reloaded by Rock Candy Records there’s the bestial “Highway Song Live“, one of the best live Rock albums ever recorded and a classic in this matter for me.
Some live albums have a special place in our hearts, and “Highway Song Live” are one of those.

The likes of Thin Lizzy, UFO, Kiss, Peter Frampton and a host of others have for one reason or another pretty much earned their reputations based solely on live performance and their respected live album.
It is also true for Blackfoot, one of the hardest working bands of the era, who captured a definitive live set with “Highway Song Live”, a work of sheer perfection and ballsy brilliance.
Issued in 1982, and recorded by the Rolling Stones mobile on Blackfoot’s UK tour of the same year, the excitement and energy of Blackfoot is palpable.

When these red-necked rockers landed in Europe in 1982, they took the country by storm riding high on a trifecta of albums: 1979’s Strikes, 1980’s Tomcattin’ and 1981’s Marauder. They took the stage and plugged in the Rolling Stones Mobile and recorded some of the baddest-ass riffs they had ever played to an audience that was so worked up they spontaneous sang the final cut on the album ‘Howay the Lads!’

The show starts out with ‘Gimme, Gimme, Gimme’ and frontman / guitarist/ Rickey Medlocke spouts out the words as if they are competing for center stage with his distorted and bombastic riffs and solos.
This was a band of rockers who were dumb enough not to realize how great they were, yet smart enough to focus on the only thing that mattered, which was that evening’s performance. Blackfoot played like men possessed.

‘Fly Away’ is a great song that sets a tone, as Medlocke gives a shout out to his Uncle Shorty who was responsible for his musical DNA – the man who blew the harp on their biggest hit ‘Train Train’. Live, this song explodes with its massive riffage and fierce beat.
We have incendiary performances of such Blackfoot favorites as ‘Road Fever’, ‘Every Man Should Know (Queenie),’ and a couple of supercharged blues numbers ‘Rollin’ and Tumblin’ and ‘Trouble in Mind.

But there is no more moving moment than at the finale of the eight minute long version of ‘Highway Song’. Best described as Blackfoot’s own Free Bird, the tune was a true game changer for the band. It mixes the loneliness of the road with the exhilaration of a live rock show. Then the Newcastle audience breaks into a spontaneous chorus of ‘Howay The Lads’ which ends the recording. 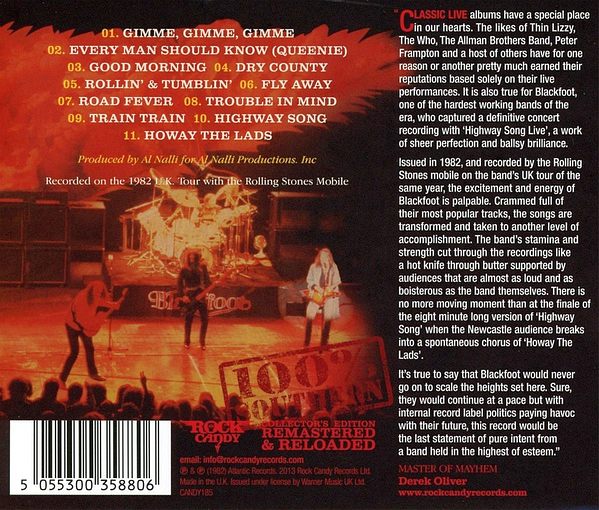 Blackfoot’s stamina and strength cut through this recording like a knife through butter supported by an audience that is almost as loud and as boisterous as the band themselves.
It’s true to say that Blackfoot would never go on to scale the heights set here. Sure, they would continue at a pace but with internal record label politics paying havoc with their future, this record would be the last statement of honest intent from a band held in the highest of esteem.
Very good, punchy and dynamic remaster.
Kick ass recording; ROCKS