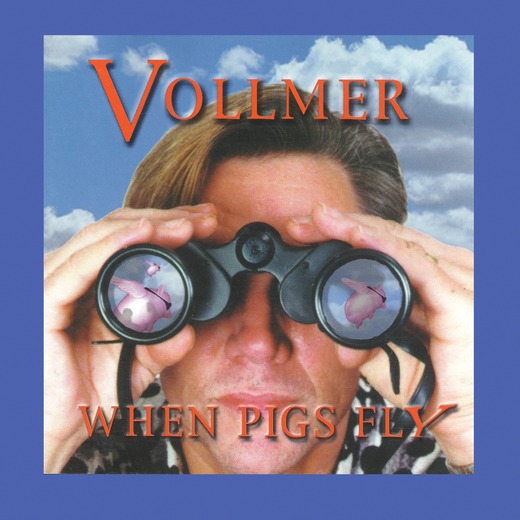 “When Pigs Fly” the one and only solo album by Brian VOLLMER, lead vocalist of the Canadian legends Helix. Originally between 1993-2004 Helix hiatus and just recently re-released 2016 through Perris Records, “When Pigs Fly” should be in every Helix fans CD collection.

After the release of It’s a Business Doing Pleasure (1993) Helix activities were temporarily suspended due the musical climate, but frontman Brian Vollmer continued writing songs and had a weekend band called 7 Year Itch with some friends, including former Saga drummer Brian Doerner – brother of Helix guitarist Brent.
The group sounded better and better, original songs started to take shape and everyone could hear how good they were, and it became a serious project.

While sounding a lot like Helix – several of the songs here ended up on future Helix albums – Brian Vollmer experimented a little here and there with some different styles, at places sounding like the stuff Alice Cooper would be during the 2000’s – and the result is a really interesting hard rock album.
Starting out with the great, energy filled song “I’m A Live Frankenstein” this is mostly a good time rock n’ roll celebration. “Life Of The Party (But Now He’s Dead)” is more modern, but still holds a metal edge to it.

“King Of The Hill” is another great track that invites you to this rocking party with an ’80s feel, later released in remixed / overdubbed form on the Helix CD Rockin’ in My Outer Space. A personal favorite.
“Stumblin’ Blind” is a fantastic ballad that would have easily been a hit single on any of the Helix releases. “Pissed Off” is a great ranting, raunchy roller that’s fun to listen to, because let’s face it, we’ve all had bad days.

“X-Ray Eyes” is another riff heavy song with a melodic chorus, while “F.U.G.L.E.Y.” is a hilarious take on society and the people we encounter on a daily basis. Title track “When Pigs Fly” is a rousing number that’s fitting as the album title as well.
The album closes out with the acoustic “Good Times Don’t Get Better Than This” that is simply catchy and fun. Of course, that’s a good thing as it’s a fun song to close out this solo outing from Brian Vollmer.

Long time out of print and the fact that many people are completely unaware of this Brian Vollmer solo album, kudos to Perris Records for this reissue with a refreshed artwork.
This is a limited pressing of only 500 CDs, so if you like Helix, then this a must buy for your collection as it really is hard to separate Helix‘s sound from that of Vollmer.
“When Pigs Fly” is a fun, rocking album that takes you back to the Eighties hard rock sound that you know and love.