More form the recent Universal Music Japan reissue series 2016: VINNIE VINCENT INVASION self-titled on SHM-CD remastered.
Though contributing to Creatures Of The Night as a session player before being named as Frehley’s replacement in December 1982, Vincent for all the public knew, was the official guitarist in Kiss and played all the lead guitar on Lick it Up.
Following his departure from Kiss in mid-1984, he formed the band Vinnie Vincent Invasion with all-pro crew of LA musicians including former Journey singer Robert Fleischman and future Slaughter’s bassist Dana Strum.

Vincent, born Vincent John Cusano in 1952, was an anonymous session player boosted to overnight rock stardom when, in 1982, he was brought in to replace Kiss guitarist Ace Frehley. Although Cusano sought to retain his birth name as a member of Kiss, Gene Simmons, presiding entrepreneurial spirit of the band, invented the stage name Vinnie Vincent (Vinnie would keep the name).
Signed bt Chrysalis Records, Vinnie Vincent Invasion debuted in 1986 with its self-titled cracker.

The record included primarily glam metal style, with much of it re-worked versions of demos Vincent recorded years before with former New England members Hirsch Gardner, Gary Shea, and Jimmy Waldo under the band name Warrior, with Vincent essentially replacing John Fannon as guitarist and vocalist. Warrior disbanded when Vincent was selected to be a member of Kiss.
Although Robert Fleischman, who served for a short time as the lead singer of Journey, recorded the vocals on the album, he exited the band due a contract dispute and was quickly replaced by new vocalist Mark Slaughter.

Right from track number one, you know what you’re getting: ‘Boys Are Gonna Rock’ has two and a half guitar solos. Oh yeah, this is a guitar-driven hard rockin’ album.
Vinnie’s screeching staccato performance is breathtaking, and on the accompanying video clip he looks feral, completely out of control. He wields his guitar like a flamethrower. He spurts out thousands of notes, like burning sparks, sometimes hammering the strings with a microphone while on his knees. For teenaged boys/boyz stewed to their eyeballs with boiling loads of testosterone, watching this on MTV was a blast. 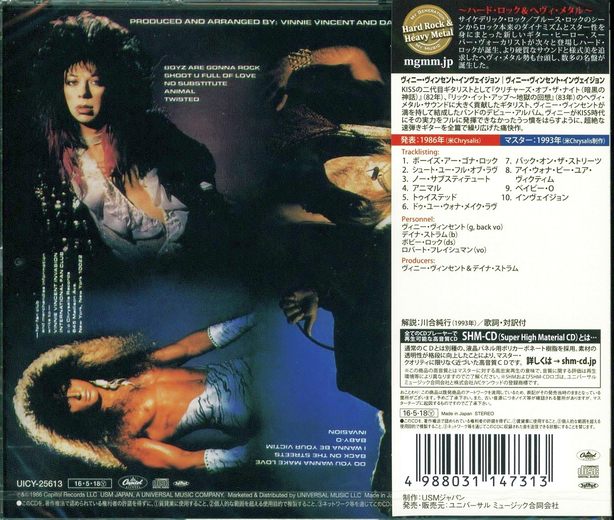 At the conclusion of the killer rocker ‘Animal,’ Vincent plays faster and harder and faster and harder and now your neighbors are banging on the wall and your bookcase speakers are starting to melt and your dog is in obvious pain and suddenly you suspect that everything in your house is going to implode. And then Vinnie collapses, and then you hear six seconds of reverb.
Other highlights include groovy ‘Twisted’, the pumping ‘I Wanna Be Your Victim’ and the sorely underrated power ballad ‘Back On The Streets’, which was later redone by Europe’s John Norum and garnered maybe an inch more attention.