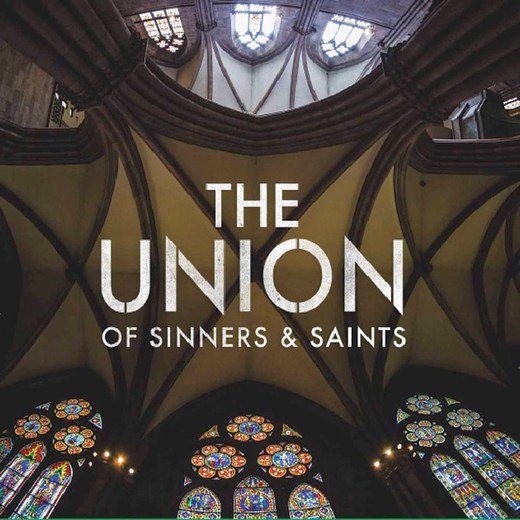 Few artists have been more influential in defining contemporary Christian rock ‘n’ roll than Petra and Whiteheart, so fans of the genre will likely jump out of their skins when they hear that John Schlitt, lead singer of Petra, and Billy Smiley, guitarist, singer, and founding member of Whiteheart, have teamed up for a new project. The newly christened band, THE UNION OF SINNERS & SAINTS, features members from two of the best selling CCM Rock bands of all time, with sales of over 12 million records between them. Collectively they have generated more than 25 #1 songs and earned more than 15 Grammy and 40 Dove nominations and awards.

Bringing out the best of Petra and Whiteheart, The Union of Sinners & Saints offers something brand-new, yet surprisingly familiar. Soaring rock vocals from Petra’s John Schlitt meet production, vocals and instrumentation by Whiteheart’s Billy Smiley, evoking a distinctive echo of what fans have loved for years.
Smiley brings in an all-star cast of musicians including the always great Dann Huff on guitar, Brian Wooten (Whiteheart, Trace Adkins) on guitar, Michael W. Smith on B-3 organ, Bob Hartman and John Lawry (Petra) on guitar and keys, Phil Keaggy on guitar, Peter Furler (Newsboys) on drums and vocals, Dave Ellefson (Megadeth) on bass and other guest appearances of selected cuts. The project also features new artist Jason Fowler on guitar and vocals.

Smiley & Schlitt sure know how to rock loud and proud. But rather than resting on past laurels or cashing in on nostalgia, the veterans have formed the brand new band.
Yeah, there’s a new take on fan favorites including Whiteheart’s ‘Independence Day’ and Petra’s ‘Beyond Belief’, but the rest of the songs are brand new. Even with more than a dozen million album sales behind them, Schlitt, Smiley and the band sound as musically hungry as ever with a straight ahead melodic rock collection that ranks right up there with either co-leader’s best work.

The album opens with the Smiley/Fowler composition ‘Rise Up’. It’s a melodic rock song with a delicious electric guitar solo by Dann Huff.
‘Brother to Brother’ is one of 3 songs penned by Smiley / Schlitt. It is a terrific classic rock number with a great electric guitar solo by CCM pioneer Phil Keaggy. Then we have the ballad ‘Now Not Never’, co-written by former Newsboys (celebrated ’80s poppy AOR act) Peter Andrew Furler who also play drums and contributes some vocals.
Next up is the vibrant cover of WhiteHeart’s 1990 classic ‘Independence Day’ with Schlitt and Smiley sharing vocal duties. Brian Wooten (Whiteheart) and Jonathan Crone provide cool electric guitar solos on this anthemic song.

For those wondering whatever happened to actual Christian Rock music, look no further than this really good self-titled debut by The Union Of Sinners & Saints. They are every bit as talented musically and vocally as their secular counterparts. The album presents Christian themes, but in a non-preachy, non-judgmental manner. Even there are also a couple tracks that are lyrically suited for mainstream radio.
Those of you who are long-time fans of groups such as Petra, WhiteHeart, Mylon & Broken Heart, DeGarmo and Key, etc, should be very pleased with this album, very well composed, recorded & produced.