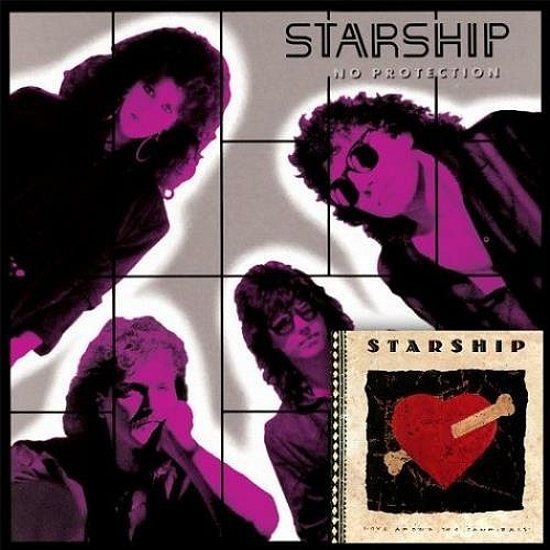 This Friday Music Records release of STARSHIP‘s “No Protection / Love Among The Cannibals” double CD including both albums in remastered form was repeatedly requested here. Initially appeared in 2009 and again in 2012, both pressings are out of print, but don’t worry, there’s a scheduled re-release for August 19th, 2016.
Let’s go now with the underrated “No Protection“.

So many have criticized Starship for “selling out” or abandoning their ’70s musical roots. Problem is, musical taste change and in the ’80s, just like in other decades, you went along with the sound of the times.
And if Staship’s sound changed to this slick, polished, catchy poppy melodic rock, then gimme more, please!

“No Protection” was, alongside the great Mickey Thomas, the final Starship album to feature Grace Slick sharing the lead vocals.
Of course, this record is remembered for including the smash hit ‘Nothing’s Gonna Stop Us Now’, a really lovely tune in its own right, but there’s more terrific songs inside.

Recorded utilising top class producers such as Michael Narada Walden, Peter Wolf and master Keith Olsen, “No Protection” is a true melodic bliss.
‘It’s Not Over (‘Til It’s Over) is one of my favorite songs from the ’80s, ‘Girls Like You’ is really infectious, ‘Babylon’ is punchy and vital, the smooth ‘The Children’ was penned by the talented duo of Martin Page & Clif Magness, and ‘Say When’ is a very cool mid-tempo poppy AOR.

As with the other album featured in this double-CD pack (Love Among The Cannibals), this remastering job on “No Protection” does exactly what the record needed: provide punch.
The original CD version was really flat, but now you have all the dynamics aplenty. This remaster really blows out your player speakers.
I love the ’80s!