RAVEN – Party Killers [Limited Edition of 500 – For Lunatics Only!]

One of the founders of the NWOBHM movement, RAVEN are some kind of cult legend and influential act, but musically never have been my cup of tea. However, alongside their last album ExtermiNation, Raven has recorded a full-length covers CD titled “Party Killers“, and it’s truly enjoyable.

While SPV Records agreed to release ExtermiNation, with the current state of the record industry the label only was able to partially fund the album. So Raven started a Kickstarter campaign asking help from the fans to cover the expense of extra pre-production, rehearsal, travel, and studio time.
The campaign was successful, and using extra funds raised Raven recorded “Party Killers”, offered as an exclusive Kickstarter reward for backers in a Limited Edition of 500 copies.

Named after the response to Raven frontman John Gallagher teenage penchant for playing awesome hard rock at parties frequented by those of less enlightened musical taste, “Party Killers” is funnily subtitled “For Lunatics Only!”
The album includes 11 Raven-ised favourites from the likes of Deep Purple, Queen, Thin Lizzy and Slade. It’s all fun stuff, despite “Party Killers” quite possibly may never have been meant to be taken seriously.

It should be though; when John Gallagher screams through Cheap Trick’s “He’s A Whore”, his brother Mark Gallagher peals off another fantastic guitar solo in Budgie’s “In For The Kill”, or drummer Joe Hasselvander pummels his way through a heavy version of Bowie’s “Hang On To Yourself”, the greatest realisation is that although they never achieved the same sales or public awareness as these bands they’ve covered, Raven leave behind them a similar wealth of legacy and influence. 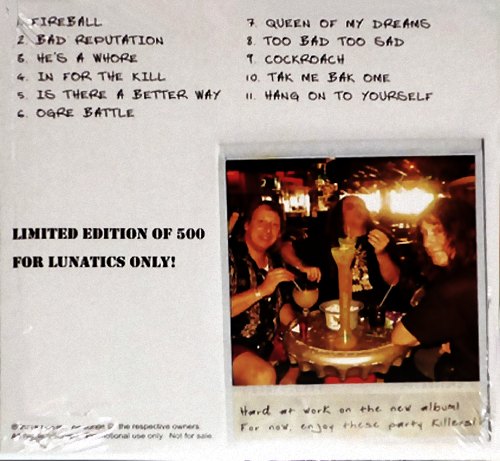 Fun, rockin’ and jolly, “Party Killers” delivers 37 minutes of classic rock ‘n roll with some of these covers truly deserving to be in any party playlist.
A strictly Limited Edition of 500 copies and a collectors item.