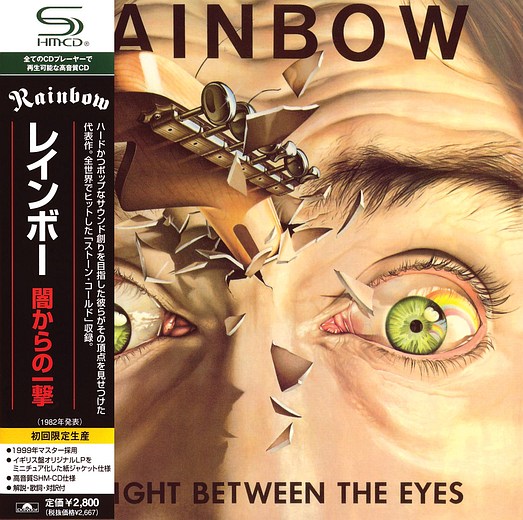 Here’s another RAINBOW staple deserving a post here: “Straight Between The Eyes” in its remastered Japanese on SHM-CD. This was the only, Limited Edition SHM-CD on Cardboard Sleeve replica (Mini-LP) format ever released reproducing the original LP artwork, now out of print. Currently has been reissued, but on a regular jewel case.

“Straight Between The Eyes” came out in 1982 and contains one of Rainbow’s biggest hits, ‘Stone Cold’, a killer midtempo semi-ballad you never get tired of hearing. The band line-up was the same as on the previous Difficult To Cure album, including powerhouse drummer Bobby Rondinelli and bass master / producer Roger Glover with the exception of David Rosenthal, who replaced Don Airey on keyboards.

Even by going commercial, Ritchie Blackmore still showed that he could write great songs, and Joe Lynn Turner sing his heart out here.
Indeed, Turner ‘feeels the powuuurrr’ as he shouts on the upbeat ‘Power’, one of the strongest tracks on the album.

All tracks rock, as the driven ‘Death Alley Driver’ with its rapid chorus and solo (love the video-clip which featured Sega’s video game Turbo), the mystical ‘Eyes Of Fire’, or the awesome ‘MISS Mistreated’.
The latter has a funny story. In an April 1982 interview with British rock magazine Kerrang!, Blackmore stated of ‘MISS Mistreated’; “Well it’s to avoid confusion that the ‘Miss’ is written three times bigger than the ‘Mistreated’ but I expect we’ll have someone who shall remain nameless coming up to us saying ‘I wrote that song’!”. That someone being David Coverdale, with whom Blackmore had co-written ‘Mistreated’ for the 1974 Deep Purple album Burn.
Even the moster ballad ‘Tearin’ Out My Heart’ – where Turner shines again – is plenty of power and moving emotion.

“Straight Between The Eyes” is a killer hard rock album, and despite its commercial approach the distinctive guitar of Ritchie Blackmore helps this record stand apart from the rest of ’80s mainstream rock. Although Joe Lynn Turner’s vocals provide a smooth vibe, Ritchie’s guitar does add a bit of metal undercurrent to the music that gives it a little extra kick.
I’ve noticed that Ritchie ended up taking a few riffs from this album and using them in similar way later for Deep Purple’s Battle Rages On, while Bruce Dickinson borrowed the exotic melody of ‘Eyes Of Fire’ for Iron Maiden’s masterpiece Powerslave.
Yes, “Straight Between The Eyes” influenced many bands / albums to come in the following years. It rocks, it’s plenty of fire, and at the same time it’s commercial and catchy.
This Japanese SHM-CD has become a collectors item.