This remastered Japanese Limited Edition of “No Rest For The Wicked” – OZZY OSBOURNE‘s fifth studio album – was the only released on a Cardboard Sleeve miniLP replica, now out of print and highly sought after by collectors.

By the late ’80s, Ozzy Osbourne had been lucky enough to work with some of the best guitarists in rock, including Randy Rhoads and Jake E. Lee — not to mention his former Black Sabbath bandmate Tony Iommi. When Lee was fired due a songwriting dispute, his replacement had some mighty big shoes to fill.

Given how fortunate he’d been with guitarists before, it wouldn’t have been surprising if Osbourne’s luck finally ran out when it came time to record his next album, “No Rest For The Wicked”. But as fans quickly discovered when the LP hit stores in September 1988, rock’s Prince of Darkness had stumbled across another brilliant axeman in Zakk Wylde.
Wylde’s arrival coincided with the return of bassist Bob Daisley, whose lyrics formed a large part of Osbourne’s solo catalog, but whose contentious relationship with the singer had put them on the outs since 1985.

Wylde and Daisley helped write all but one of the songs on the album, which also featured songwriting contributions by drummer Randy Castillo and keyboard player John Sinclair. Only one track, ‘Devil’s Daughter (Holy War)’ ended up being credited solely to Osbourne.
With awesome producers Keith Olsen and Roy Thomas Baker behind the boards, the newly augmented band set about recording some of Osbourne’s most pointed solo material, including the single ‘Miracle Man’ which gleefully poked fun at televangelist Jimmy Swaggart, who’d made headlines by criticizing Osbourne’s music before losing his ministry in a sex scandal. 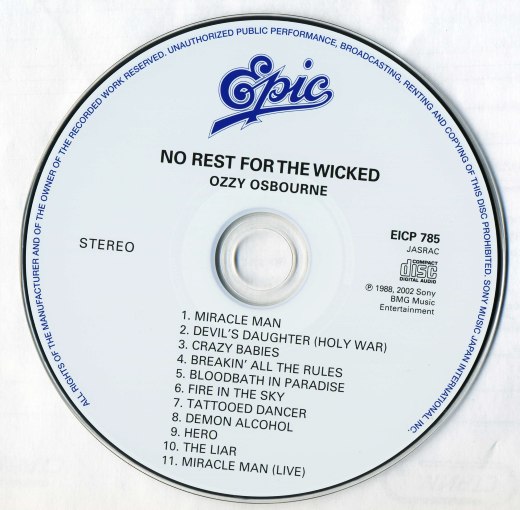 Fans responded with enthusiasm, sending “No Rest For The Wicked” to the Top 20 on the general album chart and buying more than a million copies before the year was out.
Osbourne later described “No Rest For The Wicked” as being “more like the original Black Sabbath sound … I purposely went out of my way to make a heavier album.” His words proved prophetic, considering that before long Daisley was out of the band again, replaced by Sabbath bassist Geezer Butler for the subsequent tour.

How “No Rest For The Wicked” stacks up against Osbourne’s other efforts in terms of heaviness is up to fans to decide, but it definitely served to strengthen his grip on the charts.
Between that and his appearance on Lita Ford‘s massive 1988 hit single ‘Close My Eyes Forever’, his solo stardom burned brighter than ever. With Wylde settled into the lineup, Osbourne appeared poised for another decade of ear-splitting greatness.

The killer title track, the catchy and very upbeat ‘Devil’s Daughter (Holy War)’, the kick-ass ‘Bloodbath In Paradise’, and the awesome ‘Fire in the Sky’ – one of the best Ozzy vocal performances ever – all rock hard with tons of fire.
Successful singles ‘Crazy Babies’, and the melodic yet dark ‘Breakin’ All the Rules’ are also album highlights.

“No Rest For The Wicked” started a new era in Ozzy’s career, with the crazy riffs & solos from Zakk Wylde redefining his band’s sound.
It’s a killer record with some excellent songs on it, without a doubt an overlooked album and is actually in my opinion among Osbourne’s best.
Production & sound are a blast, benefited in this out of print Japanese Limited Edition by a superb transfer to digital, plus a high quality package including the original LP artwork, sleeves, etc.
Highly Recommended.