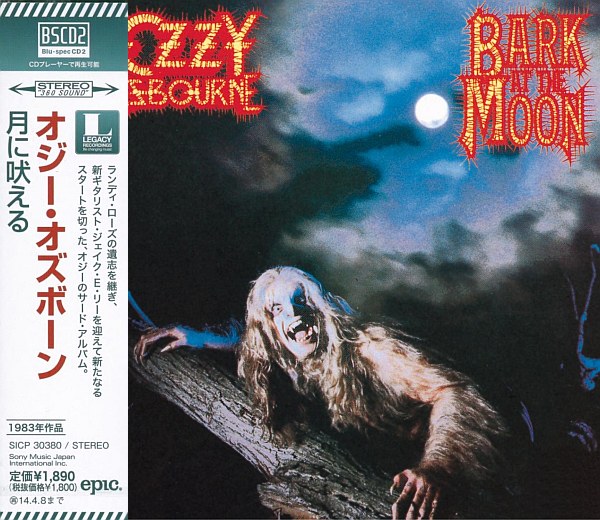 “Bark At The Moon“, the third OZZY OSBOURNE solo album was requested here in its recent remastered version pressed on high quality CD, this means Japanese Blu-Spec CD2, Sony Music exclusive manufacturing similar to SHM-CD.
But basically, to check how it sounds the remix of the album.

Yes, this beloved Ozzy classic album “Bark At The Moon” was remastered, but also with an unadvertised remix. There was no sticker on the cover indicating this album was remixed, and it was also ignored in press releases. The liner notes claim this was mixed by Tony Bongiovi (like the original).

Why this was done is a mystery to me, I’ve never read anything about it. All I can say is that you’ll notice particularly on Jake E. Lee’s solos, the overall sonics, and some keyboard parts as well.
The ending to some songs, and the beginnings of others are very different. Maybe Ozzy thought the album sounded dated? The remix seems as if they were trying for the drums and effects to sound more punchy, more ‘updated’. Which is silly, of course, a classic will always be classic.

Ozzy was in a bad place back in ’83. Still hurting from the death of Randy Rhoads, Ozzy was forced to audition players again, a process he hated. Jake E. Lee – original member of Mickey Ratt who became Ratt after a name change in the early ’80s – was selected, perhaps due to his ability to meld white hot riffs with melodic heavy shredding.
Legendary bassist Bob Daisley returned, as did drummer Tommy Aldridge, who had played on the last tour. Don Airey also returned for keyboard duties, creating a spooky atmosphere for the Ozzman to prowl.

And prowl he did. This is a hard rocking album, probably harder than the two previous with Rhoads. It is also a darker sounding album. The great ‘Now You See It (Now You Don’t)’ is an example of a song that has all these qualities. It has a hard, almost Sabbathy guitar riff, but is cloaked in a mysterious darkness.

‘Rock ‘N’ Roll Rebel’ is the most upbeat song; who doesn’t like a song about rebellion in the name of rock and roll? It also has obvious references to the TV preachers who were out to get Ozzy at the time, so the song is like a big middle finger from Ozzy.
Then you have the jokey weird ballad, ‘So Tired’. At least that’s how I heard it then, and still hear it now. The video seems to emphasize the jokey aspect. Who doesn’t love to see Ozzy dressed up as monsters? As far as the song goes, I have no idea what they were thinking at the time. Maybe it was the drugs? Another weird thing — even thought I think the song is a joke, I love it!

Returning to the sonics on this remastered / remixed version of “Bark At The Moon”, for my personal tastes, it’s all good. I still love how my ol’ vinyl / original mix sounds, but this one seems great for a digital format.
This Japanese Blu-Spec CD2 delivers a really solid-rock, thick output, and I like it a lot. In may aspects it’s a pretty different album, but in the end the significant thing are the killer songs, and as said before, a classic will always be classic.
A Must Have