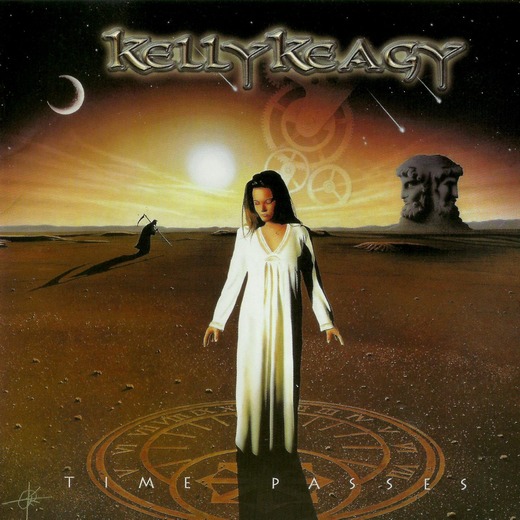 Frontiers Music are reissuing some of their very early releases now deleted, and one of these is the terrific solo debut by Night Ranger’s vocalist / drummer KELLY KEAGY. The album, “Time Passes”, is now presented including the original Japanese bonus track.

For many, “Time Passes” was some kind of a celebration, kinda the return of the very early ’80s Night Ranger but augmented, mostly due the presence of Jim Peterik (Survivor) co-writing many of the songs and playing on the record.
“Time Passes” rocks harder than most of what Night Ranger did after the first album, but it always maintains its melodiousness. Even when things slow down a bit, as on the title track and ‘Too Much To Ask’, this CD keeps a rockin’ edge and nerve.

I really love all tracks on “Time Passes”, such as the kicking opener ‘Anything Goes’ (co-penned by master Tim Pierce), “Acid Rain” (co-written by Jack Blades), or the awesomely melodic ‘Before Anybody Knows I’m Gone’ (a Peterik contribution).
‘The Journey’ (Keagy / Peterik) has a midtempo pace akin a ballad but with lyrics that are especially poignant, it’s also a high point on the CD as is the title track.

‘Bottled Up’ was co-written by the great Bruce Gaitsch with Keagy, so you know what to expect; a breezy melody. Another favorite is ‘Wrong Again’ where Night Ranger’s Brad Gillis / Gary Moon not only co-wrote, but also play / co-sing with killer performances.
By the way, it should be noted the musicianship on the album is simply stunning.

“Time Passes” is a terrific melodic hard rock album, blending the best of Night Ranger, Survivor, Damn Yankees, and why not, Pride Of Lions.
It rocks like a bad boy but with loads of melody all over, wrapped by a bright production. This reissue includes the original Japanese bonus track ‘I’m Still Here’, another superb upbeat tune ala Night Ranger.
AWESOME album.