“Jekyll And Hyde” is the second album from GUNDACKER, one of the most exciting indie Melodic Hard Rock bands from de San Fransisco Bay Area. Exciting indeed, because thirty years ago bands like this appeared in the area like mushrooms everyday, but now 2016, find one like Gundacker and its true late ’80s sound, it’s a rarity. And a really welcomed one.

On the blog we already featured the band’s debut album (formerly known a Gundacker Project), and praised the band’s true ’80s heart.
Mastermind Dave Gundacker grew up in Anchorage, Alaska where he learned to play guitar and drums at a very young age and moved to the San Francisco Bay Area in the ’80s where he played on various underground bands, while writing and recording demos of original Melodic Hard Rock music.
When the musical environment changed in the hands of grunge, Dave stopped performing his original music to audiences, dedicating his time to teaching.

But with the recent resurgence of MHR/AOR, Dave decided to return into the game enlisting Bay Area veteran drummer Craig Martin, female bass player ‘Win The Bassmaiden’, keyboardist Alanna Bautista and singer Timothy J. Bednarz. It was then the Gundacker Project born in 2012.
That lineup recorced the first album, but now 2016 the band changed not only their name to simply Gundacker, but also has a new female lead vocalist: Amanda Dieck, owner of a velvety yet melodious set of pipes. 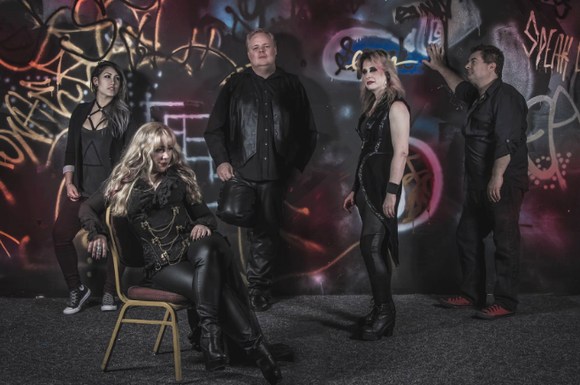 What has not changed a bit is Gundacker’s sound & style: late ’80s high energy, electrifying Melodic Hard Rock with AOR touches plenty of catchy hooks, strong melodies and full vocal harmonies typical of the genre / era.
Uptempo kicking numbers such as ‘Raise Up Your Flag’, the catchy ‘Scene of the Crime’, the hot title track, ‘You Won’t Take Me Down (Without a Fight)’ and the killer guitar-driven ‘Watch Your Back’ provide the hard rockin’ side of the album.
Then you have the AOR / Melodic Rock impregnated tunes like the great ‘Reach for the Stars’, the keyboard/synth filled ‘Find a Way’ or the power ballad ‘Penny for the Wishing Well’.