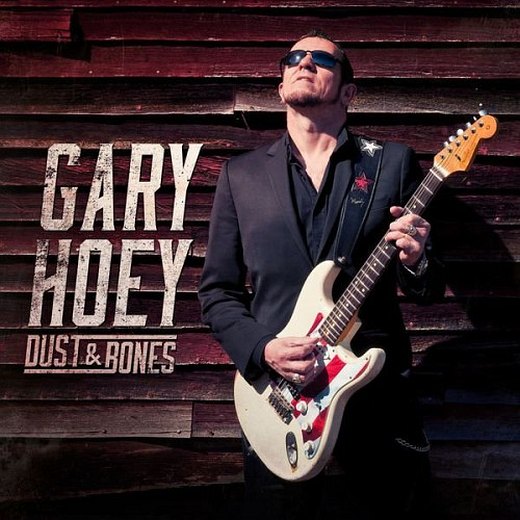 A true ’90s guitar hero, GARY HOEY is often known as a shredder who takes on many classics, reinventing them in all their metal glory. However, Hoey began exploring his formative roots in recent years, and “Dust & Bones” his new album released today is exactly that; a great mix of rockers, foot stompin’ blues, pop, etc, and there’s even a duet with Lita Ford in a power ballad.

Gary Hoey indeed got quite a track record. Not only did he audition for Ozzy Osbourne (Zakk Wylde got the job, so no shame there) but he also had a Top 5 hit in the ’90s with a cover of ‘Hocus Pocus’ from first solo album, recorded a kicking hard rock album with his band Heavy Bones (alongside Frankie Banali), and also toured in support of and/or played with all sorts of names from Brian May to Jeff Beck.

In “Dust & Bones”, it feels like Hoey is very much at home where pays homage to many of his musical heroes. Composed in the vein of each, the CD consists of a very cohesive mix of tunes, ranging between edgy bluesy rockers and atmospheric midtempo tracks to classic rock ‘n roll. Hoey sings with just enough grit and attitude to make the CD sound truly authentic.
It covers all sorts of blues styles featuring his Stratocaster playing and there is even a power ballad with Lita Ford on shared vocals. Other musicians in the power trio line-up are Matt Scurfield on drums and AJ Pappas on bass. They do a fine job in anchoring the songs, leaving the space for Hoey’s guitar fireworks.

The CD kicks off with ‘Box Car Blues’, a slide guitar driven rocker that would grace any Joe Bonamassa record. ‘Who’s Your Daddy’ is a gentler blues shuffle which leads into ‘Born To Love You’ – this is a great song and sounds like ZZ Top’s Billy Gibbons is an obvious influence.
Lead song off the album is ‘Dust & Bones’ and this should be on rock radio everywhere if the band’s publicist is good at their job; it’s a driving track, still heavy but commercial at the same time.
‘Steam Roller’ is listed as a Johnny Winter tribute and I can’t think of a better description for it.

The aforementioned power ballad, ‘Coming Home’, is actually very good and features some of the best guitar work on the entire record, plus Hoey and Lita vocals together sound sweet and emotional.
This leads into ‘Ghost Of Yesterday’ and I think this is another terrific song that could do well as a single. An up-tempo number with a catchy chorus and capped with a lengthy solo.
‘This Time Tomorrow’ (killer midtempo), ‘Back Against The Wall’ and ‘Blind Faith’ are all good but with three entirely different styles. These lead to album closer ‘Soul Surfer’. It’s is the only instrumental on the album and it’s a superb way to finish showcasing Hoey’s talent.
This Deluxe Edition include two bonus, the very melodic acoustic / dobro filled ‘Boston Strong’, and ‘Amazing Grace’, the traditional song made with a soulful instrumentation. 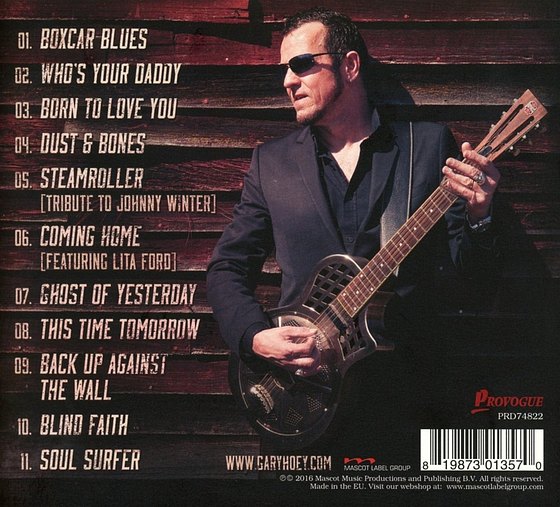 This is an album that will appeal to all bluesy classic rock fans and if the album is anything to go by, then his live show, if it makes it over here, will be loud and great.
“Dust & Bones” is a blues based record, but while Hoey can play the genre alongside the best, he’s a guitarist with a ‘shred’ foundation, so expect some ‘edge’ on his delivery. And I love that.
Highly Recommended.