DYNAZTY – Knock You Down [Japan Edition +3] 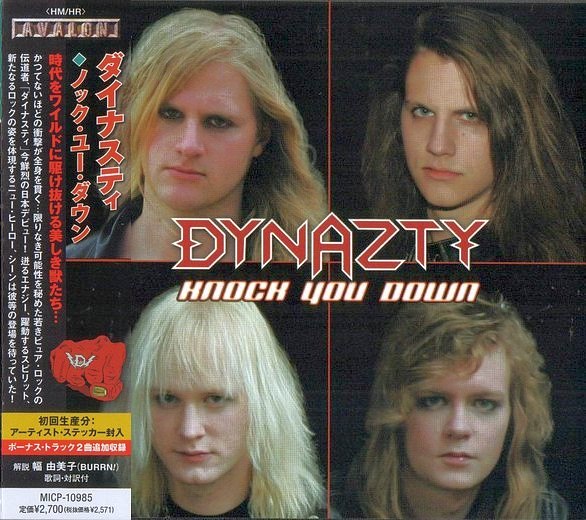 Many are missing the early days of Swedish rockers DYNAZTY, their more hard rocking origins, and one of you asked for the band’s second album “Knock You Down” in its Japanese Edition featuring 3 bonus tracks, different artwork and tracklist.
Recorded in Los Angeles and mixed in Stockholm by the expert Chris Laney, the album speak of quality and top notch craftsmanship.

By the time of this recording – despite their name including Y’s & Z and many people thinking they were a sleaze band – the band’s sound was strolling down the same path as usual with triple capital “S” (Steelheart, Slaughter, Skid Row) as perhaps not main influences, but definitely inspiration.
Lead singer Nils Molin is in the old-school powerhouse-style vocalist, and Rob Love Magnusson likes to shred with melody but fire, and his rhythm riffs are quite heavy for sure.

Anyway, Dynazty was pretty hard rock oriented when this album was created, and that’s clear in the glitter present on the fiery kick starter “Sleeping With The Enemy” and the chop-fueled “The Devil’s Playground”, both sitting nicely in with the more modern sleaze acts.
They’re definitely at their best when they keep things nice and clean (read: old skool) on tracks such as the awesomely catchy “New Sensation” or the brillant melodic rocker “Hunger For Love” with its addictive chorus line.
Another very late ’80s inspired numbers are the melodic anthemic title track “Knock You Down” (great guitar work), and the scorching “Wild Nights” sustained by a typically Sunset Strip riff.

There’s also more strength and sharp tracks here, being the best of all “Throne Of China”. The prowess of this song has a killer groove and a superb guitar shred reminiscent of early Dokken riffest, with Magnusson reminding me Jake E. Lee on the solo.
“Mr. Money” is another good one, a strongly guitar based hard rocker with a very contagious gang chorus and a live feel. On “Brand New Day” and particularly “The Great Delusion” they sound like ’90s Skid Row, less gritty but dark and deep.

Japanese bonuses include the sweet “Too Much Is Not Enough” including acoustics, and “Stand As One” exploding at the middle fully into electric, a very nice semi-ballad.
The best, and one of the highlights on the disc, is the uptempo rocker “One In A Million” with its contagious chorus and catchy refrain, a pretty commercial tune featuring melodic guitars.

Dynazty have previously mentioned they are not interested in sounding like an ’80s band. Well, lately the group has changed their sound to a more modern style, but at the time of this “Knock You Down”, Dynazty was pretty ’80s hard rock.
The overall sound (superbly produced by Chris Laney) is Scandi-Melodic Hard Rock with a bit of sleaze, but the song structures, licks and most the choruses are definitely ’80s L.A. scene hard rock. In many way they remind me Eclipse. And I love it.

“Knock You Down” is a kick ass album for the most part written & played in high level, featuring very cool choruses, fine melodies and some insane guitar licks courtesy of Rob Magnusson. Don’t worry about vocals because you have a very capable and charismatic lead vocalist in Nils Molin.
This record just jumps out at you, and the title is so fitting because it really punch your ears.
Highly Recommended.