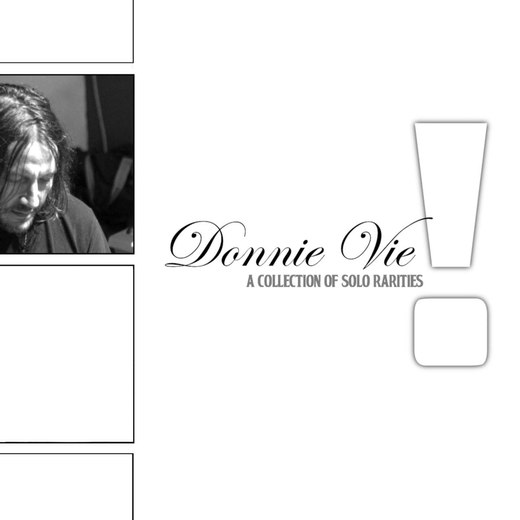 The material on “!” was selected by Donnie’s producer Lewis John and musician Baz Francis, his partner in the new band (called V8) they formed together.
Baz said; With the prolific nature of Donnie’s talent, it always amazes me what he considers an ‘outtake’. Sometimes circumstances just prevent that extra song from being on one of his records, and other times gems just get forgotten along the way.
Being in the privileged position that we are, Lewis John and I found ourselves in the care of material that fits into the above categories, and returning to an idea I suggested to Donnie several years ago, we have compiled his latest rarities collection, “!”.

The title was my idea; a reference to Donnie’s former band Enuff Z ‘Nuff’s “?” compilation, and a nod to my own emphatic feelings about his continued musical journey.
This new album is almost like a bonus disc to both Donnie’s solo discs ‘The White Album’ and ‘Goodbye: Enough Z’nuff’, as that is the era from which 9 of these 10 songs originate. Diamonds in the rough, but diamonds all the same.
Then to top it all off, we present you with Donnie’s extremely talented niece Maddie Benjamin performing her uncle’s tribute to her Mum (and his sister, Amie), a remake of Enuff Z’Nuff classic ‘Innocence’.

The Enuff Z’Nuff vibe is still here, as for me, this is an Enuff Z’Nuff record… maybe not in name but certainly on the songwriting aspect for sure just because Donnie Vie always was the core of the band. All are cool pieces of melodic music, with the typical Vie’s melodic power-pop and classic rock touches.
One for fans of his work and rarities collectors. Sweet stuff.