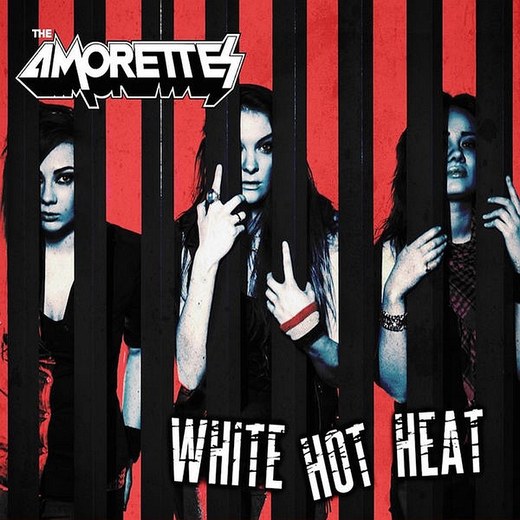 Seeing that “White Hot Heat“, the new album by Scottish trio THE AMORETTES has been produced by Luke Morley, songwriter / lead guitarist of UK hard rock giants Thunder, piqued my interest.
“The Amorettes make a great noise,” says Morley, “so I was delighted to be involved in the new album. They opened for my side band The Union some time ago, and I’ve been watching their development with interest ever since. We’ve captured something really special with the album, and I think it will surprise a lot of people.”

Additionally, many songs have been co-written by Morley and Ricky Warwick of Black Star Riders, so seem The Amorettes must have something interesting to offer. They play British rock n’ roll with a late Seventies / Eighties influences and a sleaze / punkish attitude plus some glam flavor. Throw-in some The Runaways for good effect.
The opening track entitled ‘Batter Up’ reminded me of CBGB and the sort of artistic endeavor best associated with working class and beer throwing riffs.

It’s the sheer and utter attitude of ‘turn your amps up to ten and never turn it down again’ while trying to sound as cool as possible, but, in reality you’re probably too pissed to notice what the hell is going on.
Nothing too fancy, neat or complicated, and definitely no more than four chords. I’m not going to lie to you. You’ve heard if all before and you’re probably going to pick up yet another record the following next week that fall somewhere between the rebellious and sleazy rock as played by The Amorettes.

“White Hot Heat”, the sophomore release by this female power-trio promenade or rather stroll up and down the street outside the original CBGB and it’s merely a shame it’s been closed for ages now. They’d be at full swing at the club, screaming at the top of their lungs to “Come n Get It” and “Let The Neighbours Call The Cops”, since they don’t give a damn about society rules or laws.
It’s nonetheless the very competent and professionally crafted record and 10 tracks that oozes of lipstick and leather? Black and red?

Beer, sweat and smoke, the more correct description as the walk it like they talk it. It’s the fun, up all night, sleep all day, sort of record with more balls than all of the footballers at the current Euro Cup.
In many ways, this easily could be your favorite Summer album to enjoy with your friends with a beer at hand and a delicious BBQ.