Alongside the first-ever release of Modern Primitive STEVE VAI is releasing today June 24 a remastered & expanded version of his ground-breaking album “Passion And Warfare” celebrating its 25th Anniversary. Both are being released as a 2CD physical collection while each disc will be available as a separate title as well.

In 2016, Steve Vai’s “Passion And Warfare” remains one of the most lasting documents of the guitar virtuoso genre. The chicken-pickin’, Van Halen-esque riff of ‘The Audience is Listening’ and the ‘80s radio rock of ‘I Would Love To’ clearly place this album in the era of bright spandex and grandiose, hairspray-coated locks.
A good half of Passion And Warfare’s songs have since become Vai classics, if not calling cards (‘For the Love of God’, ‘The Animal’) and all the music packed inside hasn’t lost its staying power.

In the years between his first solo record and “Passion And Warfare”, Vai was a prolific studio and live musician, performing with artists like Alcatrazz, David Lee Roth and Whitesnake. By the time 1990 rolled around, Vai had refined his guitar craft to a degree that demanded a solo career.
Written based on a series of dream sequences that Vai had when he was younger, “Passion And Warfare” was all recorded in The Mothership studio at his home in the Hollywood Hills, in which his guitar parts for Whitesnake’s 1989 album Slip of the Tongue were also recorded. As such, Whitesnake frontman David Coverdale has small spoken parts on Passion And Warfare.

With a sonic approach and bombastic, glossy production typical from late ’80s US hard rock “Passion And Warfare” made waves and received a RIAA Gold certification. The melodic, rock-solid tunes caused great impact not only bettween electric guitar aficionados, but also rockers in general.
The influence of ‘80s rock and metal has since diminished in Vai’s work (especially in favor of more orchestral compositions), but the legato clean guitar on ‘For the Love of God’ and ‘The Riddle’ are still staples of Vai’s sound.

“Passion And Warfare is a case where the hits continue to justify their status as such. ‘For the Love of God’ is every bit the virtuoso staple that it deserves to be. Intensely spiritual (Vai went on a 10-day fast during the writing of the song) and musically astonishing for sure.
The funky swagger of ‘The Animal’ is still a thing to behold in a live setting, while the sketch comedy idea behind ‘The Audience is Listening’, wherein a young Vai raises hell with a rip-roaring guitar solo during his class show-and-tell, is as cloying as it was in 1990, but in its unabashed joy at the thrill of making one’s way up and down the guitar neck, it remains an essential track about the appeal of shredding.

The lesser-known cuts from th album hold up just as well as their famous counterparts.
‘Ballerina 12/24’, with its glassy Eventide effects, is the shredder’s equivalent of a Bach prelude; both in its demands of dexterity and its refracted guitar effects, it is a brief but compelling case study for the compositional depth of the guitar virtuoso style.
At some point, all guitar shredders fall prey to the problem of technicality for technicality’s sake – but “Passion And Warfare” embraces technicality for the sonic enjoyment it provides, not for the ego fires that it stokes.
The same can be said of the unusual and appealing chord progressions on ‘Sisters’, whose sparkling guitar tone Vai would bring back to memorable effect on Alien Love Secrets‘s Jimi Hendrix tribute The Boy from Seattle.

The 14 original album tunes on “Passion And Warfare” are joined on the 25th Anniversary Edition by four bonus tracks.
The best of these, the sitar-accented ‘Lovely Elixir’ is anchored by powerful chord strums atop which Vai lays down some appealing guitar lines. The remaining three – ‘And We Are One’, ‘As Above’, and ‘So Below (Niels Bye Nielsen Orchestration)’ – are interesting curiosities. All showcase Vai exploring his guitar technique, and those looking to pull apart the nuances of what Vai does with the guitar would do well to give them a spin. 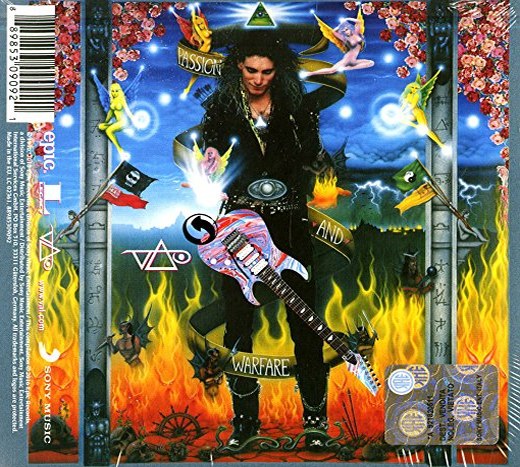 It should come as little surprise that “Passion And Warfare” holds up as well as it does over 25 years later (actually 26 years; the album was released in 1990). The precedent Vai set with the record is one that many virtuoso guitarists, even those responsible for laying the groundwork for the genre, regularly far short of: namely, the importance of the instrumental guitar song as a vocal-independent form.
Essential album.