Legacy Recordings / Sony Music Entertainment are presenting today June 24 the first-ever release of STEVE VAI‘s “Modern Primitive” songs and recordings. Based on song sketches and works-in-progress penned and recorded by Vai following the release of Flex-Able, his solo debut album, the music on “Modern Primitive” has been completed by Steve Vai for release as a full album 2016.

The material on “Modern Primitive” which was written and partially recorded between 1984 and 1990, features music that ranges from intense to delicate melodic chasms to some truly bizarre masterpieces.
Vai actually has recorded many of the guitars now 2016, and the whole production / sound is very modern according to his current setup.
“So it’s new music” – say Steve Vai “and frankly it’s turning out to be one of my favorite records”.

Vai’s debut Flex-Able was pretty experimental, while his second Passion And Warfare is truly accessible and ‘commercial’ speaking of instrumental albums.
“Modern Primitive” is the missing link between these two records. So there’s catchy tunes mixed with more virtuoso stuff.
Take the track ‘Never Forever’ as example. Opens with a rapid drum fill, leading into a frenetic bass line and gorgeous, soaring melodies married with crystalline keyboard work. It’s unbelievably airy, evoking images of wispy clouds rushing by as the wind gently blows back your hair on an open-air flight. Subdued vocals guide the track’s calming sense, and Vai’s guitar work eventually assumes a vocal type role, imitating the soft croon from the first verse. 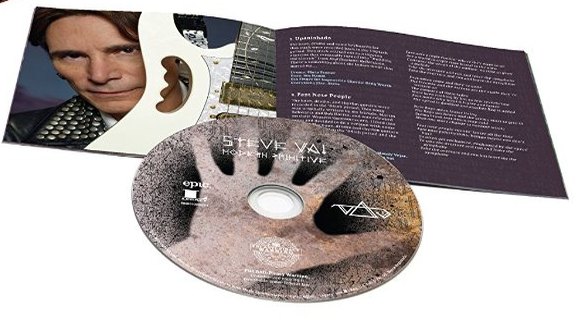 The oddball textures of Flex-Able and the inventiveness of Passion & Warfare cohabitate on “Modern Primitive”; to an extent, it’s easy to imagine this album as having been released in 1987. However, it sounds very 2016 due its modern production / mastering.

In bridging the aforementioned two records, “Modern Primitive” reveals that there are clear connections between the two, even though, as Vai rightly notes, there is a night-and-day feeling to the transition. Both share an interest in unusual guitar effects, scales and melodies from outside the Western musical tradition, and an affinity for strong foundational guitar riffs.
A must for fans of electric guitar.