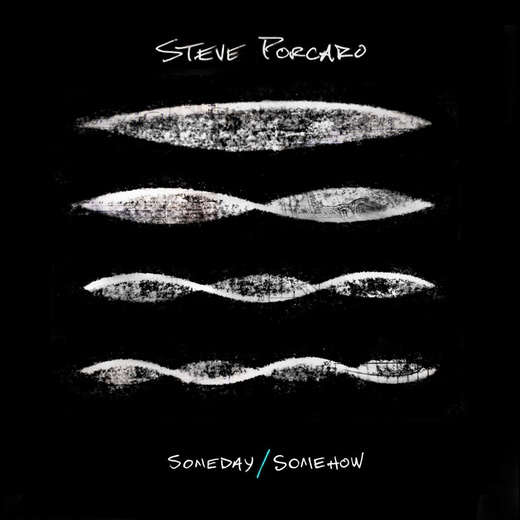 Almost 40 years after he co-founded Toto, keyboardist STEVE PORCARO is releasing today, June 10, his first solo album, “Someday / Somehow“, a 13-track CD including some terrific material that Porcaro has been amassing for decades.

“I’ve always been writing and recording over the years, hoping to find homes for these songs with other artists,” explains Steve. “Lately, I’ve been reminded repeatedly how short life is, and I think it’s finally sinking in and with the encouragement of Toto’s bandmates, family and fans, I decided it was time to remove my excuses, throw down, let go and finish these songs the way I hear them.”
Porcaro’s had some painful personal reminders of life’s fragility, losing a pair of brothers and musical partners over the past 25 years. Toto drummer Jeff Porcaro succumbed to a heart attack in 1992, and last year, bassist Mike Porcaro lost a long battle with Lou Gehrig’s disease.

Steve Porcaro did lead vocals for seven tracks, and Michael McDonald on “Swing Street,” and “Night Of Our Own.” Jamie Kimmett on “She’s So Shy,” and “Face Of A Girl,” Michael Sherwood on “Make Up” and Toto’s backing singer Mabvuto Carpenter on “Painting By Numbers.”
“Someday / Somehow” also features guest appearances by Toto guitarist Steve Lukather and a few of the group’s touring members — percussionist Lenny Castro and drummer Shannon Forrest.
Longtime collaborator, awesome guitar player Marc Bonilla recorded on many tracks as well.

The opening of the album “Ready or Not”, the first single, it’s a song dedicated to Steve’s sons and in general is an hymn of the love of parents to their children. A key element of this first track is obviously the famous “Porcaro groove”, a family trademark: in fact on bass we can recognize notes from the mytical Mike, unreachable as always, while on drums the groove of Shannon Forrest recall very much the style of Jeff mixed with distinguishable percussion of Lenny Castro.
The second tune is entitled “Loved By a Fool”, a mid-tempo track, with the Steve’s incredible voice combined with his amazing synths and a final solo. Lenny Castro again on percussion and Robin DiMaggio playing drums.

Next is the track that gives the title to the album “Someday / Somehow”, a great piano/synth and a touching voice, with choirs from Michael Sherwood. Bass on this tune is from Sam Porcaro, while guitar arpeggios is the work of Jimmy Haun.
“Swing Street” is sung by Michael McDonald. His warm voice paint a journey on the Californian hills, where Steve grew up, with the repeating chorus “down on swing street”. The collaboration with Michael McDonald comes from a lifetime friendship, that grew in the Los Angeles studios, passing through “I’ll be over you”, and the last Micheal’s 2014 tour with Toto north American tour. Guitar is played by Steve Lukather and on bass is Mike Porcaro.
The fifth song “She’s so Shy” is a wonderful ballad sung by Jamie Kimmett, young and talented singer and songwriter, with a great interpretation that payback the friend Steve, who strongly wanted him in this project.

Finally we arrive at the gem of this album, “Back to You”, which at the beginning was destined to Toto but never finished by Steve. The emotion is big listening to the rhythm section of Toto, Jeff and Mike, playing together once again, plus the voice and keyboards of Steve Porcaro. The atmosphere is very much like Toto from the ’80s, a unique sound and an exciting groove. Unreachable for anyone!!
“Face of a Girl” is a great ballad sung by Jamie Kimmett, once again with a superlative interpretation. A very effective percussion loop by Mike Biardi on the entire song gives a sense of growing emotions that reach its top in the guitar solo of Marc Bonilla.

Then “To No One”, a midtempo track full of deep emotions from the lyrics and Steve’s voice accompanied by the guitar of Jimmy Haun. It is highly recommended for the listener an analysis of the words and not just the music from this album: these lyrics are never banal, and in between the lines they hide the great sensibility and elegance of a complete musician like Steve Porcaro.
“Makeup” is a really extraordinary song. Michael Sherwood’s voice capture the attention of the listener in a contagious mid-tempo. Mike Porcaro’s Bass and Robin DiMaggio are the foundation of a exciting groove for the entire length of the track. We really needed to hear Michael Sherwood in a unique project like this one.

With “She’s the One” we comeback to a pure Toto sound. It is a song that would easily fit in an album from the band during the ’80s, with an awesome arrangement and an orchestral exciting finale with magical synths by Steve, the wonderful guitar of Steve Lukather, fantastic percussion of Lenny Castro, and the immense groove of Shannon Forrest. What else to say if not “WOW”!!!
“Night of Our Own” is one of the greatest ballad heard these times. Protagonist once again is the warm and biting voice of Michael McDonald, a master interpreter of songs like this one, a unique professional, a gentleman of fine music. Thank you Michael for still giving us great emotions after all these years, Porcaro – McDonald mix is a warranty. 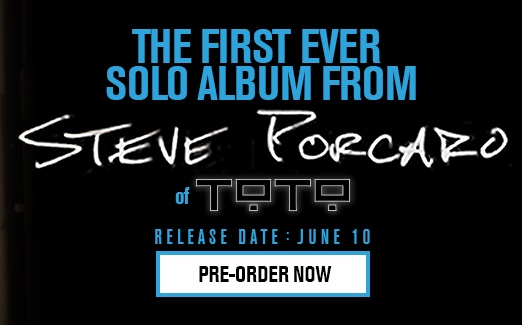 Finally “Painting by Numbers” on of the pearls of the entire album. Singing this song is the dear friend Mabvuto Carpenter, background vocalits from Toto. The friendship born between Steve and Mabvuto probably convinced Steve to have the talented singer in this new challenge, the interpretation of a ballad in his new solo album. Mabvuto gave a wonderful performance with his soul and his impeccable precision in every note. Very exciting at the end the voices of Steve, Mabvuto, Michael Sherwood and Jimmy Kimmett together. Guitars once again are directed from his majesty Steve Lukather.
We conclude our listening with “More Than I Can Take”, piano and voice by Steve Porcaro. What to say, a ballad full of emotions.

This is what you can find in “Someday / Somehow”, a mix of emotions, groove, elegance and timeless music. It took some time for Steve Porcaro to put this out, but at the end a this pearl came out, a work of art, not just a music album.
As Toto fan, AOR fan or simply top class music fan, surely you won’t have to miss it. Thank you for all Steve.
DELICIOUS