Ah yes, the RED HOT CHILI PEPPERS… why not? I always liked this band. Sure, they have been repeating themselves since 1991, but now they have changed with their new album “The Getaway” to be released next June 17.
Everybody knows what Red Hot Chili Peppers all about: searing funk jams, syncopate drums and a general over-obsession with female genitalia, right? Well, yeah, kinda, but not so on “The Getaway”.

The band’s 11th album – their second with guitarist Josh Klinghoffer, following the (second) departure of longstanding six-stringer, John Frusciante – is full of surprises, the most immediate being in its restraint: a focus on delicate and melodic dynamics throughout suggests a more profound exploration of their sound beyond each musician’s virtuoso abilities.
Perhaps this was a consequence of their choice to work under Brian “Danger Mouse” Burton (U2) as producer, or maybe real change was only possible upon parting ways with Rick Rubin, who’d helmed their albums since 1991’s breakthrough classic, ‘Blood Sugar Sex Magik’.

To adapt is to survive, and “The Getaway” lives up to its name: if 2011’s ‘I’m With You’ was Klinghoffer tentatively stepping into Frusciante’s well-worn shoes with a weight of expectancy upon his/their back(s), then this album finds him – and his elder cohorts – escaping with assured strides as a resilient and purposeful unit: RHCP Mark VI, if you will.
A change was apparent in lead single, ‘Dark Necessities’, when an elegant piano refrain appeared in a breakdown usually reserved for a wailing guitar solo – a disarming tactic further applied in the otherwise slinky funk of ‘Sick Love’, whose chorus is softer and dreamier than the song’s foreboding main body, which warns of the emptiness of fame, and in the drum-less chorus of the wistful ‘Encore’.

“Darkness helps us all to shine,” Anthony Kiedis sings in ‘Dark Necessities’, as if to vindicate the shadowy streak that runs throughout his narratives here.
From calling it a day in ‘The Longest Wave’ with a girl who was “under my skin and half my age,” to penitence for a friend’s passing in ‘Feasting On The Flowers’ – death also surfacing in the affecting ‘Goodbye Angels’ – Kiedis nimbly sidesteps any assumptions that sex dominates his brain, instead painting a spectrum of vivid shades.
The intense and melancholic closing track, ‘Dreams Of A Samurai’, is especially complex in its naked emotions; is he the “perfect storm” of which he sings? He’s certainly aware of his own capriciousness, noting: “Clearly I’m a contradiction”. 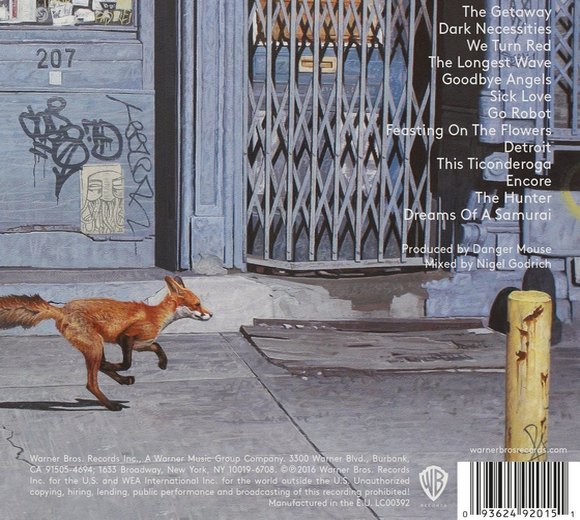 The fluctuating musical hues in “The Getaway” are seductive – Chad Smith lays down some Bonham-like might in the funky ‘We Turn Red’; then ‘Go Robot’ is pure ’80s like a long-lost Knight Rider theme with shimmering synths and syncopated handclaps, while ‘This Ticonderoga’ is thunderous and almost hard rock with incredible bass runs courtesy of Flea’s nimble fingers.
A band reborn? Possibly. Refined? Definitely. The ‘rap vocal’ sections are gone and all these work as rock&pop songs.
The brilliance of “The Getaway” is in its subtleties, which define their most intimate and expressive album to date, and suggest that, after 32 years, the Chilis can still keep us guessing.