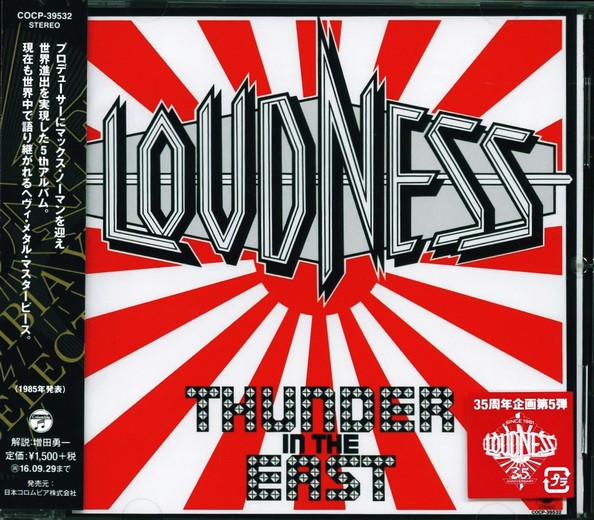 Nippon Columbia started a 2016 reissue of LOUDNESS eight albums featuring a fresh remastering supervised by the band members for the fist time. These series are low priced and are a great opportunity to get the albums at a very reasonable cost.
Let’s go with the really strong “Thunder In The East“, the first released by a major American label after the contract signed with Atco Records, a subsidiary of Warner Music Group.

“Thunder In The East” was the record that finally put the Japanese metal pioneers Loudness on the map for the Western metal world thanks to an emblematic cover artwork, a simple but very effective album title and songs that are now entirely performed in English.
Thank God, the band didn’t abandon their already quite unique sound to appeal to a larger mainstream public and this record still delivers everything one likes about the band.
Of course some tracks are really catchy with more radio potential than before but this doesn’t mean that they are not technically impressive or original.

Opener “Crazy Nights” already proves that the band takes no prisoners and still focuses on gripping Hard Rock and classic Metal riffs plus a catchy chorus and a big feeling of rebellious freedom inside. More truly impressive songs come after.
The tracks on the album are all around the four minute mark, being either mid-paced or faster in tempo and all sharing a similar traditional metal / hard rock sound. Having an overly simplistic sound can easily ruin albums, but Loudness pull all of these off with really awesome, and rather unique riffs combined with catchy hooks and lead sections.

It’s actually amazing how many good ideas these guys have fit into this one album, most of these songs start off really badass, but you’d naturally expect them to get kinda lame, but this doesn’t happen. The album is sometimes frighteningly consistent in this aspect, as the good riffs and solos just keep coming.
It’s all good stuff with numbers such as “Like Hell” and “Get Away” showing off the great riffing and soloing that Akira Takasaki (the Japanese Eddie Van Halen) is capable of, and the choruses to these two are way too awesome.

“Run For Your Life” is another blast, while “Heavy Chains” has a ridiculously good solo section, easily my favorite on the album.
The Japanese always had a talent for great romantic love songs. One in here is the hard rocker “We Could Be Together” that features a cool love message crowned by an epic radio rock orientated chorus.
Another half ballad / midtempo comes in the end with the chilling album closer “Never Change Your Mind”, a track that should have been into every power ballad compilation. Great tune.

Produced by genius Max Norman (Ozzy Osbourne, Y & T) with a slick sound, “Thunder In The East” is shockingly good, especially to someone who has never heard this band before.
It’s a kick ass album, including songs that will stick with you for days. I couldn’t get the “Crazy Nights” riff out of my head the day I heard it.
I would recommend this album to fans of more traditional metal, and hard rock fans will love this as well. You definitely may consider this album a hidden gem, it’s not perfect, but damn is it good.

This whole record screams ’80s and has a great vibe full of great riffs, wicked solos, solid vocals and a really catchy feel at the same time, that makes this band unique.
Loudness’ “Thunder In The East” is a great album, incredibly still unheard by many fans of the genre. These excellent Japanese remasters come to solve this at a very affordable price.
Highly Recommended.