“Lightning Strikes” was LOUDNESS definitive breakthrough into the US market, and one of their best albums. This Remastered Japanese release on SHM-CD sounds terrific.
The album, which was released on July 25, 1986, remained 15 weeks in the American charts, peaking at #64 Billboard.

“Lightning Strikes” was produced by the great Max Norman (Ozzy Osbourne) which was truly involved in the making of the album, not only helping to shape the sound for Loudness’ worldwide appeal, but also writing proper lyrics for the American taste.
The sound was a little bit switched to more of a pop-metal feel, something especially notable in opener ‘Let It Go’, some kind of Van Halen meets Ratt.
However, the rest of the album is in a heavier mold, and it’s in a relatively similar style to the previous album, Thunder In The East (featured here).

Indeed, songs such as ‘Black Star’, ‘Oblivion’ and ‘Complication’ sound like they were written in the Thunder In The East songwriting sessions, with that same energetic almost frantic style of riffing.
‘1000 Eyes’ is a killer rocker in the traditional Loudness style, meaning a catchy, accessible chorus and strong songwriting throughout, with stylish guitar soloing. Then ‘Face To Face’ kicks hard with a punchy metallic edge. 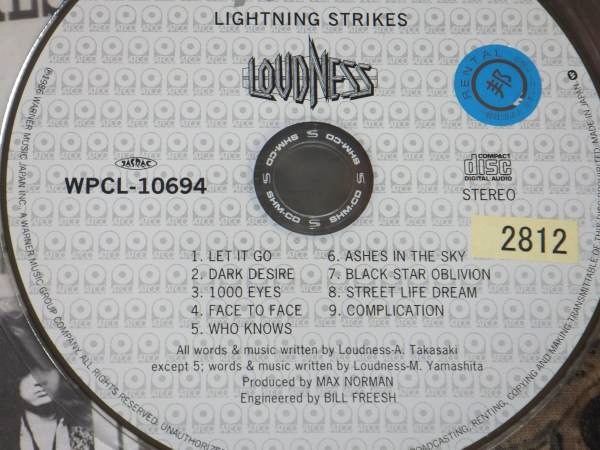 ‘Ashes In The Sky’ (aka Shadows Of War) and ‘Street Life Dream’ are definitive highlights; both complex midtempo songs with mesmerizing lead and clean guitar. Speaking of which guitarist Akira Takasaki is defiantly at the best of his game here, focusing a little less on frantic riff work in favour for more atmosphere and original chord progressions.
The other members of Loudness all play pretty career-best stuff, with vocalist Minoru Niihara improving his English benefited by Norman’s help with lyrics. It’s a bit typical for Japanese male vocals, but at times he soars higher than expected in the Western style with a fluttering vibrato following closely behind.

But Takasaki is really in the spotlight. The track ‘Who Knows’ deserves a mention as possibly the most un-even hard rock song writing in history. It features seriously one of the best choruses Loudness have ever written. Catchy hooks, heavy, great finger gymnastics, melodic guitar-work, it’s pretty much perfect for Loudness standards. It’s like a rollercoaster ride full of ups and downs, original, and that is when Loudness is simply a pleasure to listen to. 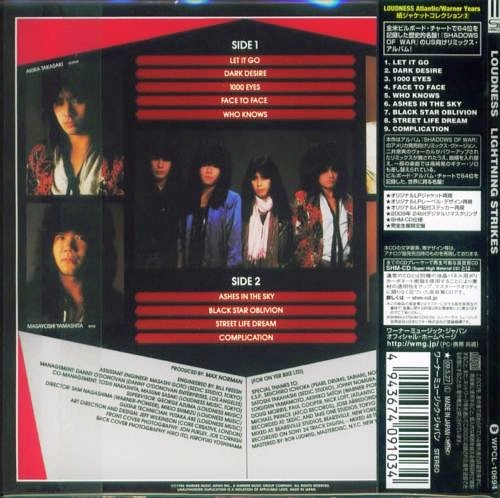 “Lightning Strikes” is one of the strongest hard rock albums appeared in 1986, and honestly there isn’t any bad moment here.
This Japanese remaster pressed on high quality SHM-CD is truly awesome, perhaps the best I heard from the Loudness catalog. Unfortunately it was a Limited Edition now out of print, and you have to pay over USD 200 for a copy.
But don’t worry, “Lightning Strikes” has been reissued few months ago as part of the Nippon Columbia low priced series. It’s a regular CD, but featuring the same remastering.
Killer album : Highly Recommended