While Swedish act KATATONIA visited various musical sub-genres since their formation in the early ’90s, with several lineup changes the band slowly moved away from their metal origins adding more progressive rock sounds and melody to their work over time. A winsome collection of lilting prog and impassioned melodies, Katatonia’s new album “The Fall Of Hearts” takes us even further afield, even adding some AOR waves to their musical offering, something really welcomed for sure.

Relying more than ever on acoustic space and lightly amplified instrumentation, distorted guitars only occasionally pierce through the otherwise contemplative soundscape on tracks such ‘Serac’ or ‘Sanction’.
The remainder of the album is given over to vocalist Jonas Renkse’s plaintive musings on life, love and loss, with his band mates complementing his pathos with patiently gorgeous instrumental accompaniment.

First single ‘Serein’ represents “The Fall Of Hearts” at its most accessible, if reductionist, point of entry. While not a “pop” song by any means, it does bear the fussed huge production and meticulous sense of arrangement that characterizes Melodic Rock / AOR.
On the other end of the spectrum – and track listing – we have ‘The Night Subscriber’, all sweeping strings and complex arrangements building up to fiery guitar pyrotechnics before returning to a sense of placid gentility.

The Fall of Hearts is easily Katatonia’s most diverse album in terms of arrangements, and accessibility. By and large, the record consists of ‘songs’ that run around the five minutes, with each one shifting from strong riffs and atmospherics (see the mellotron on ‘Decima’).
Song format verse & chorus are integral elements here, but they are not so predictably employed.
The dazzling opener ‘Takeover’ starts off with clean guitars, but not long after the guitars take on a melodic crunch that brings the song into familiar Katatonia territory. These fluid changes – a feature shared with highlight cuts like ‘Serac’ and album centerpiece ‘Residual’ – are expertly managed by guitarists Anders Nyström and Roger Öjersson, the latter of who, along with drummer Daniel Moilanen, is a new addition to the Katatonia roster.

The varied guitar sounds on “The Fall Of Hearts” are one of its greatest successes: from the nimble acoustic guitar picking on ‘Decima’ and ‘Pale Flag’ to the pick slides and shredding on ‘Takeover’ show a willignness on Nyström and Öjersson’s to bring some musical dexterity to the table. At its best, the group’s music predominately focuses on atmosphere, but a wailing guitar solo once in awhile provides a nice respite from the intensity on many of these songs. 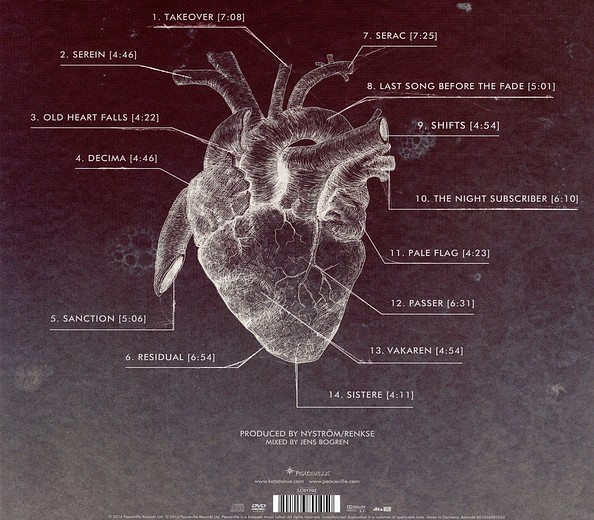 ‘Passer’ closes the album regular edition with a prog bliss, a bit more amped up than the majority of the album’s pleasures but nonetheless more sweeping and ethereal than virtuosic.
This Deluxe Editon features 3 bonus tracks; the almost poppy ‘Vakaren’ (with some Marillion on it), the slow and melodious ‘Sistere’, while ‘Wide Awake In Quietus’ is a dynamic prog number driven by a groovy bass line.

There has been much talk of an embrace of prog on Katatonia’s part, and not just because the outfit’s past few releases have been on the K-Scope label, which is known as the pre-eminent prog label of the day.
This album seems to be the first page in an exciting new chapter for Katatonia, a band now in its 25th year. For a group to sound as good as this after ten studio LPs and a quarter of a century is a tremendous thing, and “The Fall Of Hearts” is indeed a tremendous album. Why wouldn’t a band want to explore a sonic second wind of this magnitude at some length?

“The Fall Of Hearts” adheres more closely to moody, melodic progressive rock, citing melodies that are more accessible to wider Rock audiences.
If you didn’t liked the band in the past or are new to them, check out this new effort, you could be pleasantly surprised.