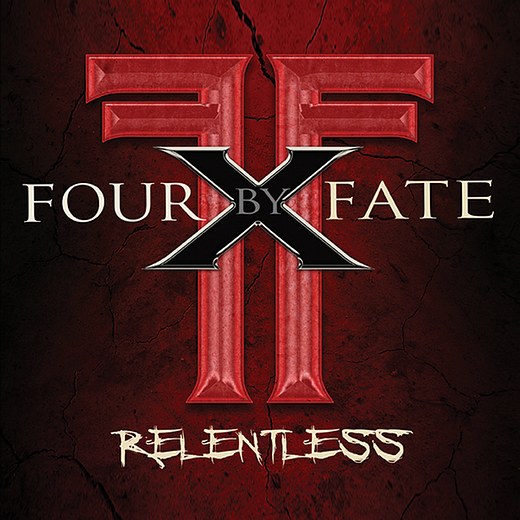 Released today, June 3, “Relentless” is the amazing debut CD by some kind of super-group FOUR BY FATE consisting of former Frehley’s Comet men Tod Howarth & John Regan, ex- Skid Row drummer Rob Affuso, and guitarist Patrick James Gasperini (Pound).
Four By Fate might just have created the best melodic hard rock debuts of the year… but the short history of the band up until this point has been noteworthy, to say the least.

The initial band line-up featured Howarth & Regan alongside guitarist Sean Kelly (Crash Kelly, Helix) and drummer Stet Howland (drummer for W.A.S.P.), but, following a car accident the tub thumper was replaced by Twisted Sister’s AJ Pero.
With Gasperini taking the place of Kelly on guitar, the line-up seemed settled… until the untimely death of AJ Pero to the dismay of hard rock community worldwide.
The six songs featured on ‘Relentless’ that Pero played on are actually believed to be his last recorded works.
Affuso stepped up to the drum stool and, finally, after much heartache, Four By Fate’s debut album was primed for release.

Prior to joining Frehley’s Comet, John Regan toured with John Waite in 1986 – it’s how he would meet his future band mate as it happens: Howarth playing keyboards for Cheap Trick on a joint tour.
So the fact that the opening track on the album is a spirited reworking of a Waite song shouldn’t be that much of a surprise: just how vibrant Four By Fate make ‘These Times Are Hard For Lovers’, and make it the band’s own in the process, is, in fact, the most surprising thing here.

What will startle, however, is the variety spread across the album.
When I listen songs such as ‘Levee Breach’ or ‘On My Own’, I hear the Eighties, but also the deep hard rock of classic bands of late Seventies with all its charm.
Alternatively, within ‘Moonshine’, I sometimes hear pre-poodle Whitesnake, but with more grit, gusto, and heaviness and less prominent blues, while ‘I Give’ lands has a Paul Stanley-like melody lines that frequent the tracklisting giving the latter a definite ‘Carnival of Souls’ feel.

When you have a track titled ‘Back In The 80’s’, you can’t be wrong. This band – and this song – has all the Eighties mojo, rocks with a melodic groove and feel-good vibe.
But ultimately, what you hear is definite righteous and rowdy hard rock. In that vein, Four By Fate covers ‘Rock And Roll Hoochie Koo’, you know, that one off hit by Rick Derringer. It’s got all the same groove, melody, and latent blues of the original, yet sounds harder and grittier like it was rolled through churning cement mixer with the cement still in it.

The qualities you want in a (melodic) hard rock record – searing lead guitar breaks and gorgeous hooks – are all present here, it’s just that Four By Fate, whose members have, unquestionably, been around the block more than a few times, aren’t playing by the rules or confining themselves to subgenre cliché.
That said, the album’s final track, ‘Amber Waves’, both in its full band and acoustic version, is melodic rock manna from heaven that will have AOR fans weeping into their perm solution.

Four By Fate’s “Relentless” may well have seemingly come from nowhere, but it is surely going places.
As say the opening track, these times might be hard for lovers, but not for Rock music fans when albums as thrilling as this are being released.
Super, Highly Recommended.