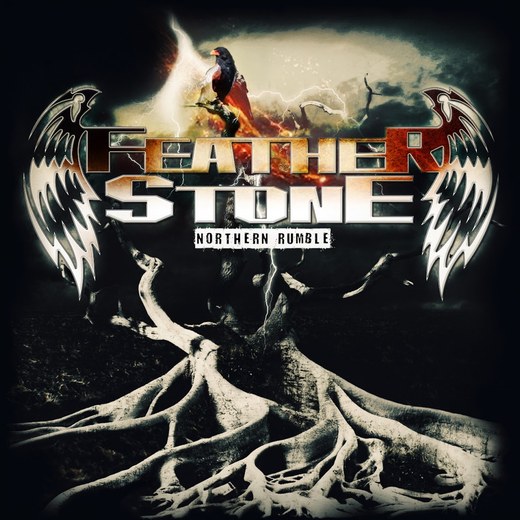 Signed by AOR Heaven Records, FEATHERSTONE are releasing today their debut “Northern Rumble” via the prestigious label.
This Swedish melodic rock outfit born in 2012 when songwriter / multi-instrumentalist / producer Rikard Quist decided that he had enough of writing & playing for bands such as Gypsy Rose, Don Patrol, Last Autumn’s Dream, White Wolf and Bangalore Choir and wanted to plough his own furrow.

Four years later, thanks to his collaboration with singer Lars Boden (Appearance) and drummer Niklas Osterlund (Headplate), the project now offers up the first products of its labour, in the form of this extremely effective and hugely impressive debut album.
Right from the off, the emphasis is placed on the richness of Boden’s vocal, with opener ‘I Need Myself The Most’ very firmly putting him front and centre, with his solo intro over a gentle guitar harmonic, before the main thrust of the song evolves it into a classic melodic rock tune, with a soaring hook and a huge singalong bridge section which reminds of Dare and Ten in its timbre.

‘Freedom Call’ sees some grit introduced to the proceedings, especially in the main riff, but without sacrificing Quist’s supreme ear for a catchy melody / harmony, especially in way he intertwines Boden’s vocal around the keyboards rather than the main guitar line.
First ‘Leave Me Be’ and then ‘Look Into My Eyes’ pick up the pace still further. The former is a defiant statement about moving on with your life, with multiple messages buried within its clever lyrics, and delivered with a confident swagger, while the latter continues this theme with its glossy coating of bravura covering its underlying darker theme.

‘Hole In My Heart’ is a classic, bluesy ballad which picks up on the Whitesnake vibe expounded at the end of the previous track, and showcases the lower end of Boden’s magnificent voice to tremendous effect, as you feel the singer wrench the lyric from the darkest depths of his range.

‘Silhouettes On The Shade’ is plenty of keyboard effects, with the synth-led stab of the opening bars quickly evolving into a dense and massive melodic main section which immediately gets your feet tapping and head nodding, while Boden’s vocals once again soar and sweep around and between the instrumental harmonies with superb effect.

‘Hold On To Love’ is another romper-stomper, very much in the feel of the style of glam-tinged melodic rock that the Swedes seem to be very much making their own at the moment, with another insanely catchy and danceable hook, this time built around a remarkably understated guitar line.
‘Fear Me, Save Me’ hurtles the album towards its conclusion with the intent of Lewis Hamilton pulling into the final corner at Monte Carlo, it’s fiercesome blues tinge combined with a crunching guitar drive and another impassioned performance from Boden.

Closer ‘Part Of Me’ rounds the album off in typically Scandi-AOR style, with another catchy melody and great use of vocal harmonics.
With “Northern Rumble” Featherstone have brought the vision of the band’s creator to glorious, energetic life in an album that ticks all the right boxes in terms of how to deliver classy melodic rock.
HIGHLY Recommended.