“The Outcast Hall Of Fame” is the new album from Scandinavian combo EVIL MASQUERADE, their seventh effort, and to be honest, I only head some single songs from this band before.
Well, let me tell you that these vikings are raising the quality level bar very up in this fresh effort.

Denmark seems to be a completely untapped source of extremely good hard rock /metal. Not only being the birthplace of a few of my favourite bands like Pretty Maids or the early and unique Mercyful Fate, but also for Evil Masquerade, who were formed by accomplished Swedish guitarist Henrik Flyman.
He’s in good company by the sounds of it since Evil Masquerade are obviously strongly influenced by huge amounts of the classic ’80 metal sound.

Their sound immediately brings to mind bands like DIO, Scorpions, Rainbow, Tony Martin-era Black Sabbath, and of course, Pretty Maids, with chugging riffs draped in swathes of orchestrated compositions. There’s a fair amount of Richie Blackmore in the music, with its blues based choppy riffing and harmonious solos.
But there’s something new that seduced me in “The Outcast Hall Of Fame”: Evil Masquerade has incorporated some kind of bombast akin Avantasia. 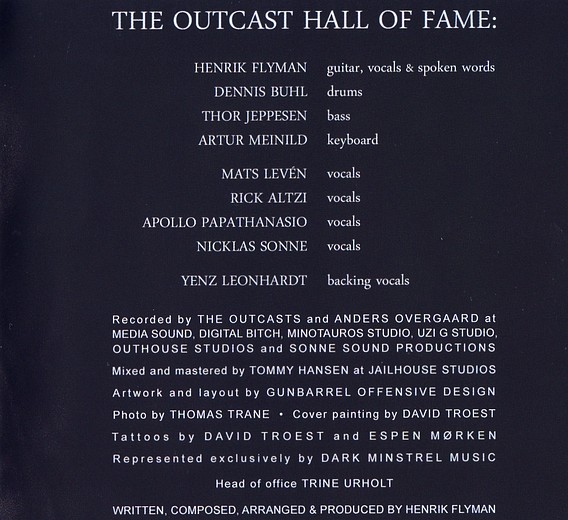 So, there’s a lot of melody, but also we have a cast of impressive singers onboard (Evil Masquerade has not a permanent vocalist). The delivery of the vocals are absolutely nailing it on every track, and it’s not surprising with such talent.
Mats Leven (Treat, Yngwie) shines on ‘Darkness (I Need You)’, Rick Altzi (Masterplan, At Vance, Thunderstone) delivers a thrilling emotional interpretation in the great ‘One Thousand Roses And A Lot Of Pain’, Apollo Papathanasio (Spiritual Beggars, Firewind) on the title track, while Nicklas Sonne delivers a stupendous performance on ‘Lost Inside A World Of Fear’, an outstanding confirmation of his talents after his recent work with Section A.
All sing together in the highlight of the album, closer ‘On No Way To Broadway’, a brilliant composition with various sections.

As a self-produced by Henrik Flyman just goes to show the dedication the man has to his art. There’s always one member of any successful band that goes that extra step to make the music sound as good as it can, and its a testament to the man that he’s managed to make it sound as huge as any of the contemporaries that he was influenced by.
The end product is frankly outstanding. The mixing and mastering has been handled by Tommy Hansen (Helloween, Pretty Maids, Jorn) and should give you plenty of insight as to how polished and product is.

Anyone who is a fan of that late ’80s to early ’90s Scandinavian & European hard/metal style is going to lap this up. Clean and balanced delivery and epic classic riffage with top class vocals. The whole recording is enhanced by a smart savoir faire, set in an ultra dynamic yet organic and powerful sonic design
Its just the thing to listen to break up the monotony of everyday music and has class written all over it. A tour with Avantasia or some such band would do Evil Masquerade a world of good, and if you’re attending the Breaking Bands Festival this year, you would be well advised to make the effort to witness this band live.
Strongly Recommended.