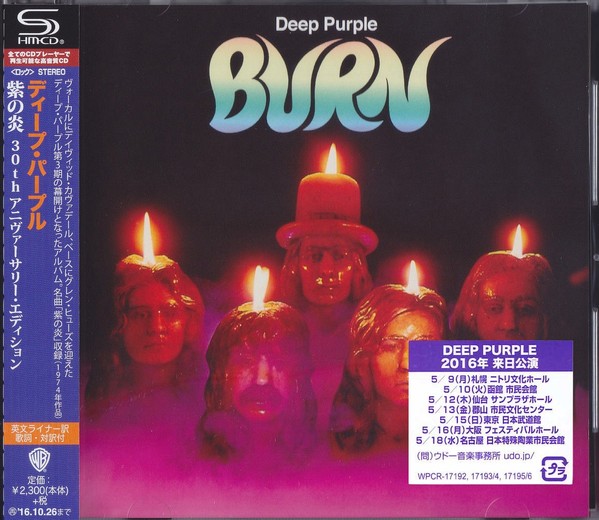 Warner Music Japan has just reissued DEEP PURPLE‘s classic “Burn“, the 30th Anniversary Remastered Edition appeared in 2004 with bonus tracks, for the first time on SHM-CD, and at a very affordable price.
Simply put, this is one of the best hard rock albums of all time.

Up until “Burn”, Deep Purple had been a wonderfully oiled heavy rock outfit capable of outstanding brilliance and a string of classic albums; In Rock, Machine Head and Made In Japan.
With the loss of Roger Glover and vocalist Ian Gillan (both left the group) most bands would have folded or imported others of superstar status – Paul Rogers and Phil Lynott were on the shopping list.
But instead, Purple recruited two relative unknowns; Glen Hughes from the up n’ coming Trapeze, and David Coverdale, a shop assistant in a Yorkshire menswear shop.

The result, a cataclysmic implosion of styles as hard rock met blues and funk to produce one of the finest Rock albums of the mid Seventies.
A template for a more commercial approach to rock that many, including Whitesnake and Rainbow, would later successfully follow.

And this remastered release doesn’t disappoint. From the opening bars of ‘Burn’ the sound virtually rips your speaker cones apart – it’s an assault on the senses – the vibrancy of Blackmore’s guitar, the urgency of Lord’s keyboards, the sublime vocals of Coverdale and Hughes.
As you reel from the opening blow, Lord’s Hammond drifts in, reminiscent of Woman From Tokyo, but ‘Might Just Take Your Life’ is more typical of this album’s more soulful approach.
“Burn” is a subtle bending of styles; the sheer pace of ‘Burn’, ‘You Fool No One’ and ‘A 200’. The bar room heavy blues of ‘Lay Down, Stay Down’ and ‘What’s Going On Here’. The slow burning funk of ‘Sail Away’ and every one of the wonderful 7 minutes 27 seconds of the incredible ‘Mistreated’.

By all accounts, there wasn’t much ‘extra’ studio footage around, so the bonus tracks here are restricted to 5 remixes, including ‘Coronarias Redig’ (an instrumental single b-side).
Of the others (‘Burn’, ‘Mistreated’, ‘You Fool No One’ and ‘Sail Away’) you’d be hard pushed to spot the difference, although the remixing does freshen up the sound and add a little extra sharpness.

But for me, the stars of the show are the vocals – this remastering / SHM-CD really make you appreciate the extent to which Coverdale and Hughes share vocals and they’re both outstanding.
Let’s face it, we all knew what Paice, Blackmore and Lord could deliver. But Coverdale / Hughes had to prove they had what it takes. And how.
To sum it up, this “Burn 30th Anniversary Remastered SHM-CD” is a bit like meeting an old teen girlfriend many years down the line, to discover that she’s had a face lift, is hotter than hell, and can still get your rocks off.
Awesome sound.