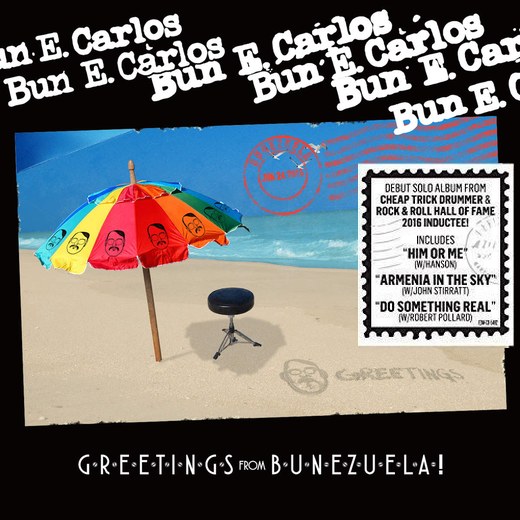 Cheap Trick drummer and 2016 Rock & Roll Hall of Fame Inductee BUN E. CARLOS has released his new solo album, “Greetings From Bunezuela!” via SPV Recordings in Europe.
Bun E. Carlos’ drumming introduced some of Cheap Trick’s biggest hits; his sticks were the first sound audiences heard on I Want You to Want Me and Ain’t That a Shame among others. Now Carlos (born Brad Carlson) has finally recorded his long-threatened album of obscure covers that helped form his musical persona.
The album includes 13 tracks in a classic rock mold, 11 of which are covers, and mostly with a true Cheap Trick feel, featuring a varied cast of solid lead vocalists.

The first two tracks, “Do Something Real” by Robert Pollard of Guided By Voices and The Who’s “Armenia City In the Sky,” are drenched in a Cheap Trick marinade; the bass and guitar in particular sound like Trick’s Tom Petersson and Rick Nielsen.
“Him or Me” features the Hanson brothers on a cover of Paul Revere and the Raiders, and this version also has the power pop sheen Cheap Trick are known for.

Turning the proceedings more rocking, Alejandro Escovedo sings lead on “Tell Me,” one of the Rolling Stones’ more obscure tracks, and Carlos reaches way back to enlist Randy “Xeno” Hogan (who was Cheap Trick’s original lead singer before Robin Zander) for “Let the Mystery Be” and the really melodic “Count On Me.”
Carlos does not sing or perform a drum solo on “Greetings from Bunezuela!”; what he does is anchor each track with the perfect Bun E. beat, particularly on Bob Dylan’s “It Takes A Lot to Laugh, It Takes a Train to Cry,” which sounds like a lost Cheap Trick cut. 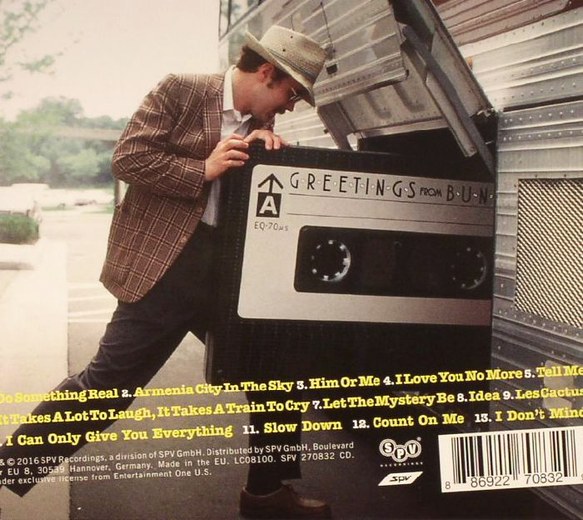 Bun E. Carlos’ “Greetings From Bunezuela!” is a pure American Classic Rock record with some melodic power-pop moments in the vein of Cheap Trick.
All the musicians here play with plenty of fire and inspiration, especially guitarists Rick Rizzo and Nicholas Tremulis, bassist John Stirratt, and of course Carlos, whose drumming is as rock-solid and confident as ever.
And the guest singers also do great work, especially Robert Pollard of Guided by Voices, Dave Pirner of Soul Asylum, early Cheap Trick vocalist Randall “Xeno” Hogan, and Alejandro Escovedo (who does an excellent ballad in “Slow Down”).

“Greetings From Bunezuela!” is a cheerful collection of tunes with a true classic spirit inspired by the classic era (take a look at the album’s back cover and that big cassette!). Certainly it plays like Carlos and his buddies rolling through some songs they really like.
And they play really well and choose well enough that this ends up being plenty of spirited fun.
It’s all good, enjoyable stuff.