This one was requested in one comment (place yours!) and it’s a true pleasure to be featured here: BAD COMPANY‘s more AOR albums remastered by prestigious label Friday Music released at the end of last year. Packed in a 2-CD set, Bad Company’s ‘Dangerous Age & Holy Water – The Deluxe Edition” are impeccably mastered from the original Atlantic Records tapes by Joe “Heavy Metal Kid” Reagoso (Deep Purple / Alice Cooper / Paul Rodgers).
This exclusive first time limited release also includes a new commentary track by track from Bad Company’s singer Brian Howe as well as several out of print and rare bonus tracks like the long lost 12” inch version of ‘No Smoke Without A Fire’, the CD only release of ‘Excited’ and a rare vault find remix of ‘Walk Through Fire’.

Bad Company spent much of the ’70s as one of Rock’s most reliable and popular bands. When vocalsit Paul Rodgers left the band 1982 most people figured the band was finished.
But their label, Atlantic Records, had different ideas. They wanted a new vocalist and a revamp of the band’s sound according to the ’80s.
Guitarist Mick Ralphs and drummer Simon Kirke recruited new singer Brian Howe for what ended up serving as the band’s seventh LP, Fame and Fortune, in 1986. But even though fans failed to respond to an overall change in direction that included a poppier sound as well as an unfamiliar voice, they returned to the studio two years later for a new try.

Produced by expert Terry Thomas, this “Dangerous Age” originally appeared in 1988, helped to bring Bad Company back into the spotlight, with major radio airplay for the tracks ‘No Smoke Without A Fire’ (#4), ‘One Night'(#9) and ‘Shake It Up'(#9) all reaching the top 10 on Billboard Album Rock Tracks chart.

It was the perfect time for this ‘new’ Bad Company and their glossy AOR sound in the US: 1988. With killer hooks, polished arrangements and lots of keyboards, “Dangerous Age” is a real gem from the genre.
The album sold nearly a million copies and the band toured all over the world.

Apart from the above mentioned successful singles the awesome ”No Smoke Without A Fire’, the great melodic rocker ‘One Night’ and the groovy ‘Shake It Up’, there’s plenty of great tracks on this album.
‘Rock Of America’ is an arena-ready melodic anthem, the pumping ‘Bad Man’ rocks with class, while title track ‘Dangerous Age’ bring to mind Tommy Shaw and the upcoming Damn Yankees.
‘That’s The Way That It Goes’ is another highlight, the only album ballad with superb bluesy vocals, clean guitars and great atmosphere. 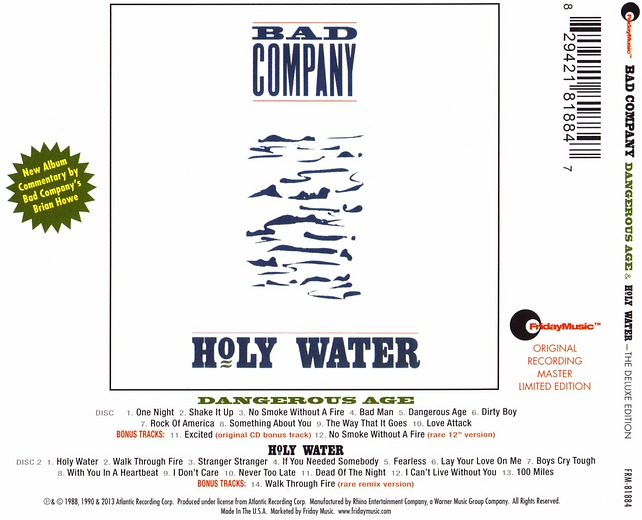 Unheard by many ’80s AOR Melodic Hard Rock fans, Bad Company’s “Dangerous Age” is a little gem from the genre.
I always found this album similar in style to the terrific Journey’s Neal Schon band Hardline appeared four years later, also in many places comparable to Tommy Shaw’s Ambition and Damn Yankees.
This Friday Music remastering is fabulous, including the long lost 12” inch version of ‘No Smoke Without A Fire’ (love it), and the excellent rocker ‘Excited’ a B-side previously unreleased on CD and nearly impossible to find.
Awesome album, awesome remaster.
HIGHLY RECOMMENDED