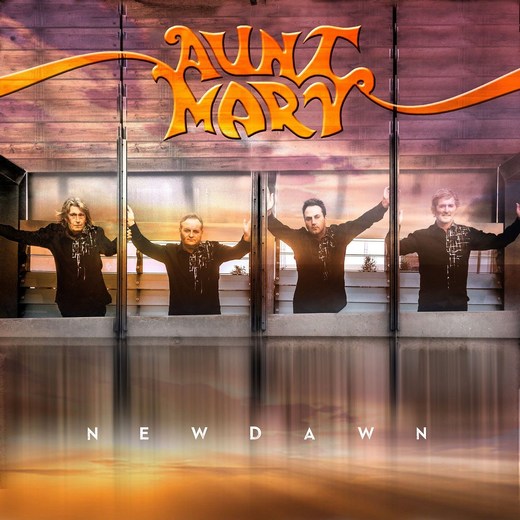 Pioneers from the Norwegian Rock scene, AUNT MARY returns with a brand new album titled properly titled “New Dawn“, co-produced by no-other than TNT’s guitarist & founder Ronni Le Tekrø.
Aunt Mary recorded two LP during the Seventies and despite the band only were together for three years, they were a seminal rock act in Norway.

Of course, one can not keep a good band down, so over the decades to follow, Aunt Mary did have several reunions and even released a Blues cover record in the Nineties. Then in 2013, Aunt Mary fan and well-respected guitarist / producer Ronni Le Tekrø gathered the original lineup of the band to record a new album, but bassist Sven Gundersen exited from the band.
Thankfully, the vision was not fading and Bernt Bodal, from progressive rockers Host joined Aunt Mary. Unfortunately, more bad news hit when lead vocalist Jan Groth resignated as well due to a battle with cancer, sadly he was succumbed by the disease in 2014.

Carrying on, Aunt Mary set forth with new vocalist Glenn Lyse, founding Guitarist Bjørn Kristiansen, bassist Bodal, new keyboardist Ola Aanje, an, and original drummer Ketil Stensvik to record “New Dawn”.
Seeming as if their bumpy road had finally smoothed over, Aunt Mary’s hardships did not stop and tragically Stensvik passed due to cancer after the band laid down tracks for “New Dawn”. Drummer Ole Tom Torjussen stepped up to the plate.

In their origins, Aunt Mary were a progressive outfit with strong electric guitars, but now 2016, the new album “New Dawn” many years in the making, show a different side of the band.
This is unadulterated Hard Rock with an European classic feeling, strong ballads, and a couple of more elaborated tracks bringing to the fore their prog roots. But essentially, “New Dawn” rocks.
The searing opener ‘Slave Parade’ has a hard swing beat that showcases the guitars with a tasty solo midway. Lyse has a bite to his voice as he riffs on the slave trade that still pervades society, just with a different face.

Next, ‘Unconditional Love’ has a mid-tempo rhythm with Lyse’s vocals getting answered by Kristiansen’s guitar. This song is a straightforward anthem for that love everybody longs to find.
Moving on, ‘Hopelessly Lost’ picks up the pace a bit with a more stadium feel. There is a gritty darkness to this track as Lyse sings the virtues of bachelorhood. The dark ‘Happily Ever After’ follows with a simple riff as Kristiansen goes as far down the fret as he possible can to get the brooding melody in this track, seeming to be talking about chemical warfare that backfires.
“G Flat Road” is one of the numbers with a progressive touch, even adding some electronics. Then, ‘I Was Born To Ride On The Wrong Side’ is a hyper upbeat piece of defiance with guitars and drums accompanying until Kristiansen breaks off on a shredding solo while Lyse sings an ode to the bad boy image.

Slowing the pace a bit, ‘Open Your Eyes’ comes in as a power ballad with acoustic guitars and percussion before opening up with tempered, but still shredding guitars.
‘Blind Date’ returns the album to the harder edge with a grinding riff that settles into a sexy melody as the piece goes into how a blind date can turn into something, and be life-changing.
‘Soldadera’ is a driving, anthemic ode to the women of military who participated in the Mexican Revolution. The melody has a hard beat with a Latin riff that weaves in and out of the track.
The finale is the fun, swinging ‘Don’t Keep Me Waiting’. This track hearkens back to the Seventies with its bluesy style complete with female backup singers.

Through all the hardships and tragedy, Aunt Mary endured it all to bring “New Dawn” to fruition. It certainly has paid off in spades as the album is a solid showcase of true classic stuff from the hard-edged tracks to the slower, more contemplative songs, and finally down to the fun finish. Lyrically, from social commentary to expressing feelings, “New Dawn” has something for everyone.
With deep gratitude to the fans for waiting for the new album, Aunt Mary have plans to tour the world to support the album, so keep a look out.