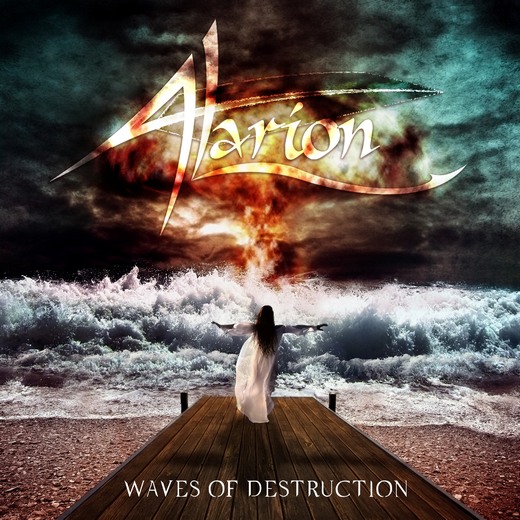 It does seem that we’ve now reached the era where anyone with great musical ideas and conceptions can produce masterful works and even get some of the best talent out there to work on their projects. A good example of this is The Netherlands’ Arjen Lucassen’s Ayreon project featuring a seemingly endless cast of musical luminaries.
Now into the mix we’ve got another Dutch progressive music impresario, Bas Willemsen’s Alarion and his debut album “Waves Of Destruction”.
And let me tell you, this is an extremely masterful work of passionate, hard-driving progressive metal with tons of melody.

Outside of a few demos Willemsen supposedly did in the last decade, he’s pulled out all the stops on this debut, most notably getting two of the best vocalists on the planet to flesh out his vision, Ayreon and Star One’s Irene Jansen and Threshold / Headspace main man Damian Wilson.
Bas is obviously the leader here as he composed the whole album and plays guitar, keyboards and bass as well as doing all of the orchestration along with a few excellent guest musicians.
Before getting into the album specifics, the overall sonic balance is what really strikes me – from beautiful ballads, to hook-heavy prog, nothing feels superfluous and there’s a great emphasis on emotionally engaging songs.

“Waves Of Destruction” is also one of those albums that I enjoyed from the first listen but really grew in enjoyment the more I listen to it and get to know the songs.
I get the feeling that Bas has been working on this for years and, since it’s really his BIG musical intro to the world, definitely wanted to put out something special and memorable and he’s certainly done that here.

The CD begins with a rousing opener ‘Chains Of The Collective’, a short five-minute heavy progressive song that has great riffs, searing guitars (what a great sound Willemsen gets from his guitar) and a powerful vocal from Wilson. That and the subtle use of dramatic electronics really makes for a great opener.
Title track comes next and, after a soft, melancholy intro featuring narration by Wilson amidst ocean sounds to underscore the coming horror of a nuclear accident and the fight to stop the devastation. It’s not a horrific or even dark song though – perhaps Willemsen sees hope amidst the chaos. It’s a quite intensely beautiful song though, again featuring Wilson on lead vocals and I especially liked the softer, pensive chorus that leads to a wonderfully powerful riff to end the song.

‘Turn Of Fate’, which is not only the first feature for Irene Jansen (damn what a voice she has – she can belt it out for sure, but has so many timbres to her vocals, from light to heavy) and this time the drama is led by the piano along with Jansen’s lead vocal. It’s a slower tempo song but never lags and the wordless vocal halfway through is just spectacular.
There is a great acoustic version of this song to close out the album and not only does this allow Jansen to shine more fully, the acoustic guitar and violin (courtesy of Ben Mathot from Epica / Revamp) show how powerful the Alarion sound can be without any electrical ampilfication.
Keeping you on your toes, ‘Colourblind’ is rousing hard-rocking prog metal at its best that would actually work well on a Threshold album before the most beautiful song on the album comes at us, ‘Clash of Eternity’ featuring the soaring Tineke Roseboom on lead vocals and more of Bas’ soaring guitar leads. 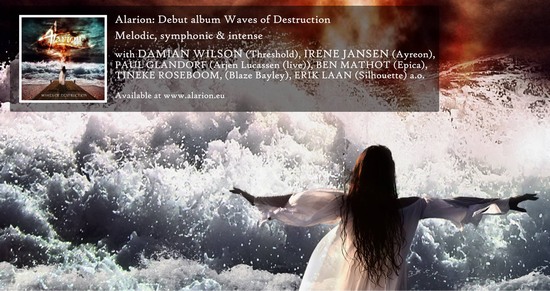 Finally after another high-intensity prog metal workout of a song ‘A Life Less Ordinary’ featuring more fantastic riffage from Bas and a wonderful melodically intriguing prog rock finish, we get the epic 12-minute ‘The Whistleblower’.
Throwing out all the stops, the composition, based on the story of a UN Police Officer who attempted to blow the whistle on sex trafficking in Bosnia and was the subject of the 2010 film of the same name, is a real homage to prog rock ambition with constant tension building throughout and wonderful vocal interplay among Roseboom and Paul Glandorf (Arjen Lucassen Band).
I swear you’ll be gasping for breath after this ambitious piece.

“Waves Of Destruction” is a very polished and incredibly professional debut by Alarion, and the sound is just excellent, deep and resonant, which makes sense given the professional mixing by Hiddo Frericks and mastering by the Peter Van‘t Riet (Asia, Threshold).
In an era where just a few bands in this genre seem to garner most of the attention, it’s great to hear such excellence coming from the mind and skill of one very talented artist along with his stellar group of guest musicians.
An album that’s sure to be on many top Progressive rock / metal lists for this year.