With the new year arriving soon many rock acts are preparing the release of new material, while others anxiously look forward for their debuts to be finally released.

We have prepared another interesting installment of 0DAYROCKZ Advanced Releases (Vol.2) with advanced tracks / singles from some of them that will see the light of day soon. Some are already established acts, some are really promising new artists dreaming with recognition.

All these tracks are not part of any album yet, some are singles available at the usual music retailers, some not, just distributed to selected press / promotion companies.

With their debut album already recorded, Londoners NIGHT BY NIGHT are one of the most new promising UK acts. Including Sisters Of Mercy’s guitarist Ben Christo in the line-up, their gripping sound fuses searing riffs with soaring melodies. Stunning, 3-part vocal harmonies charge their sound in the band’s advanced single “Time To Escape”, with a Def Deppard wink. They’re talking with labels for their full length release.

Swedish melodic rockers DEGREED have completed work on their new studio album – a follow up to 2010’s solid Life, Love, Loss album – to be released in February. “Black Cat” shows the band’s progression with a tight and catchy melodious track.

EDGE is an exciting new AOR/Melodic Rock band from Karlskoga, Sweden, leaded by Tobias Andersson (Shadowland, Seven Wishes). “Little Girl” is one of the tracks from the album to be released on February by Escape Music. If classic melodic rock is your bag then this one will be right up your alley.

Founded in 2011 by former Whitesnake members Micky Moody and Neil Murray, SNAKECHARMER includes high caliber musicians like Laurie Wisefield, Harry James, Adam Wakeman and singer Chris Ousey making for a unique supergroup. Musically, “Accident Prone”, the advanced single from the self-titled debut is everything you would expect from musicians with such a pedigree: a finely crafted Hard Rock song with blues and melodic overtones, akin to Whitesnake (of course), ’80s Bad Company and Foreigner.

“One More Minute” is the first single from HARDCORE SUPERSTAR’s upcoming album due to 1st of March 2013. Rocking track an million times better production than the previous disc.

What about Swedish sonic aggressors CRASHDÏET? The new album will be out at the end of January. The rough sounding first single “Cocaine Cowboys” envisions an edgier and not so polished sounding album…

MEMORIA AVENUE is the new band from the Norwegian guitar player and songwriter Tor Talle best known from the Northern Light project and working with great artists like Joe Lynn Turner, Fergie Frederiksen, Rob Moratti, Steve Overland and Tony Mills. The amazing singer is the very talented and hidden jewel Jan Le’Brandt. For the moment the guys are writing and recording songs for the debut album, and “Face The Aftermath” is a killer advance.

The UK’s LEAGUE OF LIGHTS are a Melodic Rock super group with an ’80s influence who already delighted us with their self-titled debut last year. The advanced single “Forever” from the still untitled new CD is a brilliant track plenty of rich harmonies.

Spanish melodic hard rockers AIRLESS will release their fourth album Changes on February 15, 2013 via Lion Music. A band which has been working seriously to get international recognition, and the single “Start Again” confirms that they largely deserves it.

Virtuoso guitar player TAKAYOSHI OHMURA is considered a kind of god in Japan but in the rest of the world is not well known. Devils In The Dark will be his international debut and surely it’s a blast. His hard rock is extremely polished and production, first rate. We heard one advance in the previous volume of this sampler, “Shadows Of Eternity” is another kickin’ cut featuring singer Chris Powers, from Arizona rockers Razer.

Lars Häggström from a small village in northern Sweden is an artist that silently is gaining admiration in all Scandinavia. With his band LARSH AND ONE2HIGH he has recorded an AOR/WestCoast oriented album to be released soon and the first single is a sweet tune with the typical Swedish touch.

For the end we have advanced material from LANESLIDE, the new Melodic Hard Rock project by Frank Vestry (Marcello/Vestry), including Alessandro Del Vecchio (Lionville), Bruno Kraler (Brunorock), John Billings (Lancia) and many more. Featuring Erik Martensson (Eclipse) on backing vocals, “Flying High” is a great song from an album that will be ‘one of the releases of the year’ in 2013. More info coming soon.

As bonus, and with Christmas arriving next week, enjoy legend JIMI JAMISON (he keeps getting better and better) performing “It Wouldn’t Feel Like Christmas”. The single was recorded last year but now is being re-released due the extensive radio play in the US and requests for availability again. 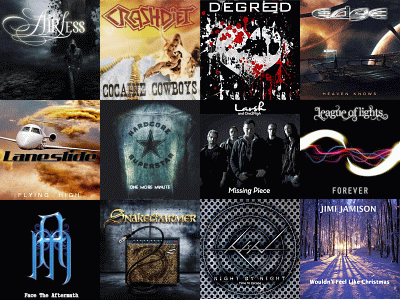