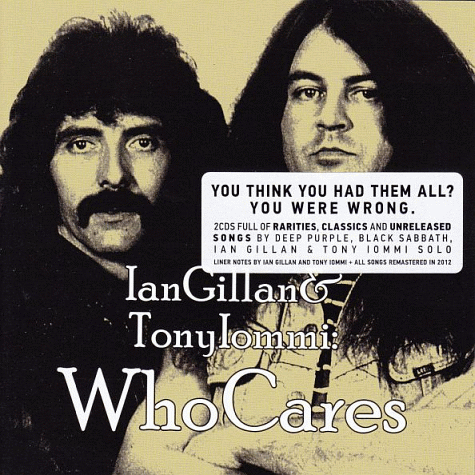 Deep Purple’s IAN GILLAN and Black Sabbath’s TONY IOMMI took everybody by surprise in 2011 by releasing a the 2-track single under the WHOCARES moniker.

For the occasion, the two rock legends called a few friends and were soon joined by Jon Lord (Deep Purple) on keyboards, Jason Newsted (ex Metallica) on bass and Nicko McBrain (ex Iron Maiden) behind the drum kit.

Not only jamming together for the sheer fun of things, this new project has united for a cause — rebuilding and helping the music school in Gyumari, Armenia. The single was a joyful and inspired moment.

Gillan & Iommi have now decided to make “WhoCares” an album for their devoted fans. Classic songs, a lot of rarities and unreleased material in two CDs of fantastic rare music.

Among the tracks are the two original WhoCares songs; Deep Purple’s unreleased studio jam “Dick Pimple” and a song from Repo Depo (a band Ian Gillan formed before the Deep Purple reunion which never released any material)

The sound quality is outstanding, specially considering that these are mostly unreleased material or have not received previously a digital treatment.

“WhoCares 2CD” is much more than a compilation or a cash-in anthology, this is a real collector’s item and a must have for every Ian Gillan, Tony Iommi, Purple, Sabbath – in short; Rock music fan.

04. M. Rakintzis feat. Ian Gillan – Get Away (first release on a Gillan album, only released in Greece before)

06. Ian Gillan & The Javelins – Can I Get A Witness (old recording)

07. Garth Rockett & The Moonshiners aka IG – No Laughing in Heaven (Rare Track)